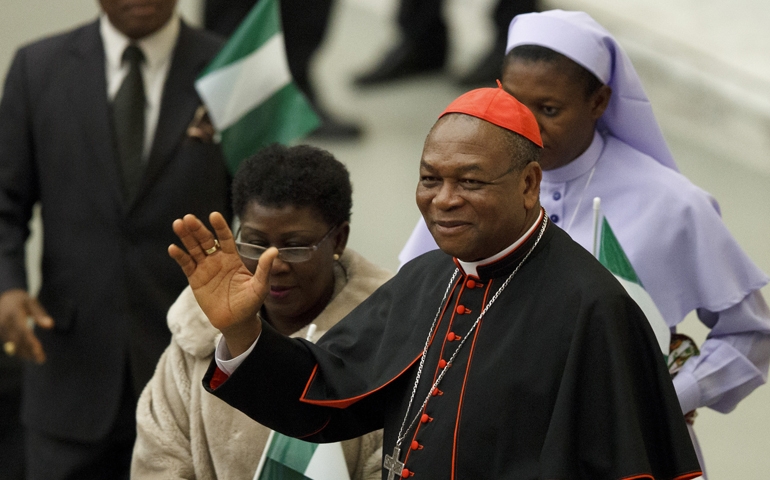 John Cardinal Onaiyekan, the Catholic Archbishop of Abuja, has called on Christians, to rise up and Christianise Nigeria instead of complaining that Muslims want to Islamise the nation.

Onaiyekan made the call in his homily at a Mass to celebrate the Sacrament of Confirmation at Our Lady of Perpertual Help Parish, Gwarinpa II on Sunday in Abuja.

“So let nobody deceive you, I don’t think there is anybody who has plan to Islamise Nigeria, but even if they do, they have every right to do so.

“They have every right to do so provided they also know that I have the right to Christianise the whole of Nigeria.

“The answer is not in complaining and crying; stand up like a man and Christianise Nigeria,’’ the Cardinal said.

He said that Christians had the mandate to preach Jesus Christ to everyone without being distracted with material things.

Onaiyekan urged Christians to defend their faith by preaching the gospel in words and deeds without comprising the message of the Cross.

He said that the disciples of Christ preached the crucified Christ, accepted persecution and that many even died for their faith.

“People complain that Christianity is being persecuted; they are saying that some people want to Islamise the nation. Just know that nobody can’t Islamise you unless you agree to be Islamised.

“For as long as you are not ready to stand up and carry the Cross, you are on the verge of losing your faith; if you don’t want to lose your promotion for Christ sake, you are also not worthy to be a Christian.

“ Anybody who presents another programme different from the programme of Jesus Christ on the Cross will lose, you will drop; you will just drop like an overripe apple.’’

According to him, Christians cannot achieve the feat by compromising their faith, it can only be achieved by carrying their cross and following Christ.

“You don’t Christianise the nation by standing up and looking for prosperity or material benefits.

“You Christianise a nation, if you are ready to stand up for the truth, preach the gospel, carry the Cross and follow the Lord Jesus.’’

Quoting from the Gospel of Mathew Chapter 10 verses 37 to 42, Onaiyekan said that anyone who loved his or her mother, father, children , husband more than Christ is not worthy of His kingdom.

He, however, said that the message of Cross is that of salvation, which was gradually being reduced to the message of prosperity, adding that it was natural to face suffering in the world.

The Cardinal said that Christianity had survived over 2,000 years and the religion became more established even when the apostles faced persecution and were even killed.

“The apostles went through horrible suffering because of that, the Church took root when everybody thought it was the end of the story of Jesus, who died on the Cross.

“That is the mystery of Christianity, if it is not God’s own doing, Christianity would not have survived,’’ he said.

Onaiyekan administered sacrament of confirmation to 63 Catholics in the parish and also laid a foundation of the 2,000 capacity new church.

According to Catholic teaching, the reception of the Sacrament of Confirmation is necessary for the completion of baptismal grace.

My House Has Been Raided 4 Times In 6 Months – Former Vice President, Namadi Sambo