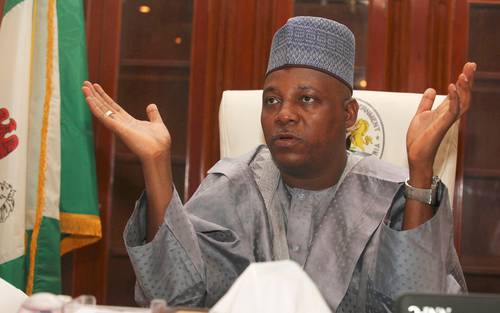 Governor of Borno State, Mr. Kashim Shettima, has described, as the handiwork of a Northern presidential aspirant, the alleged 20-minute phone conversation with a person purported to Mr. Ibikunle Amosun, governor of Ogun State.

Reacting through his spokesman, Mr. Isa Gusau, the Borno State governor said a more careful analysis of the phone conversation would have revealed that his voice is different from that of the caller, who claimed to be a member of the Peoples Democratic Party (PDP).

To prove the difference, a video of Mr. Shettima speaking to the Nigerian Television Authority (NTA) was placed side by side with the phone conversation for comparison.

He also pointed out that the way the caller addressed the man alleged to be the Ogun State governor is not the way Mr. Shettima addresses his colleagues.

“In the conversation, the caller addressed his recipient as ‘Kunle’ without the prefix, ‘Your Excellency’ as Shettima is known to use in his conversations with fellow governors. The caller went ahead to contradict himself, as he praised and castigated President Buhari while also insulting national leaders that include the Sultan of Sokoto, Mr. Amaechi, Governor Rochas Okorocha and insulted the people of the South-East,” he said.

According to Mr. Gusau, the aim of those behind the phony phone call is to incite people of Southern parts of the country against Mr. Shettima.

He attributed the phone conversation to a particular Northern politician seeking to be president in 2019.

“We are aware that one particular presidential aspirant from the North has declared a war destroy the reputation of some persons, including Governor Shettima. Late last week, a group working for him came up with a series of questions claiming they were products of a paper delivered by a non-existent Professor Ahmad Isah Harun. The questions were all direct attacks on the reputation of Governor Shettima. This week, the group followed up with a stage-managed telephone conversation,” Mr. Shettima’s spokesperson said.

He noted that the trick failed because they chose a voice that has no similarity to Mr. Shettima’s and got someone, who spoke incoherently. Mr. Gusau said similar tricks will be deployed, as the aspirant sees the Borno governor as his major problem despite Mr. Shettima not indicating any interest in the presidency.

He warned that the governor has faced bigger tests, including the Boko Haram insurgency and was also able to curb the influence of a big-time politician, who is currently “the only problem of an opposition political party.”