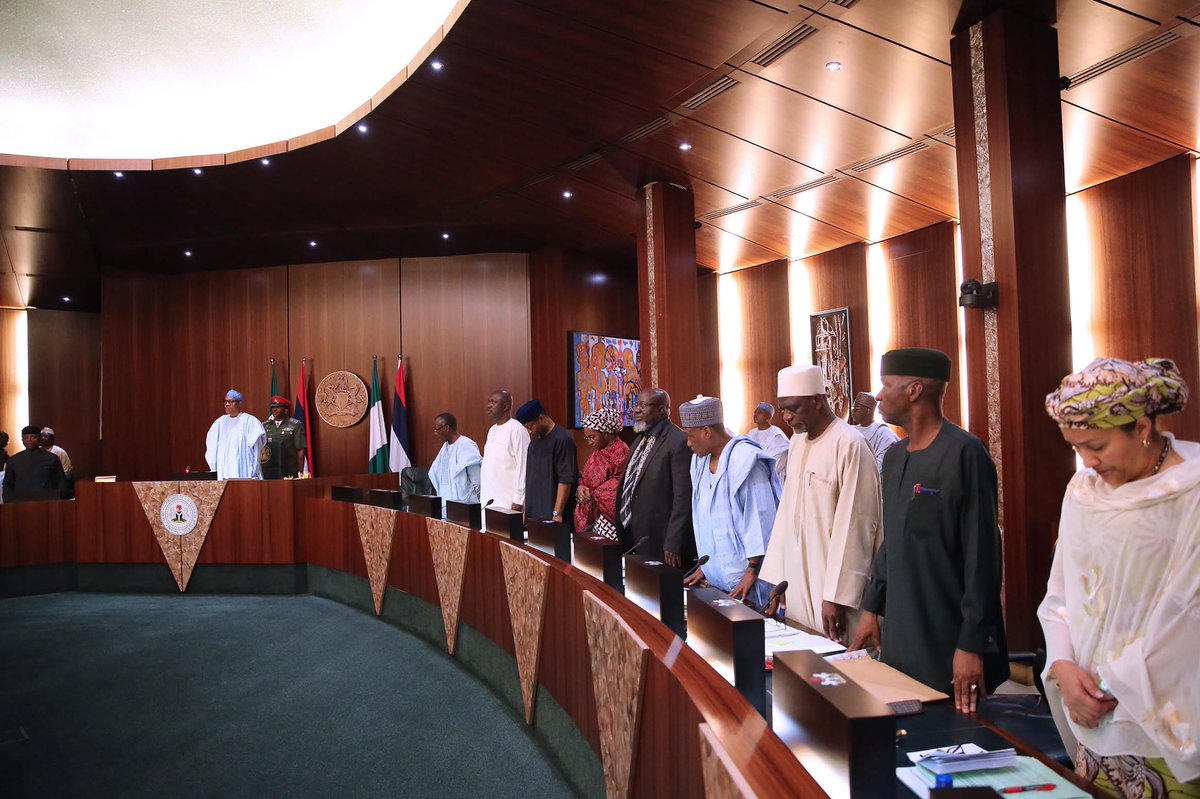 As concerns over his health condition mount, President Muhammadu Buhari would henceforth work from home, Minister of Information and Culture, Alhaji Lai Mohammed has said.
Briefing State House correspondents at the end of the weekly Federal Executive Council (FEC) meeting presided over by Vice President Yemi Osinbajo yesterday, Mohammed said the President needed rest.
He said President Buhari had already called for pending files on his table to be moved to his official residence for treatment.

“We just concluded the Federal Executive Council meeting. I am sure you noticed that the president was not there. He was not there because he asked that he be allowed to rest and asked the VP to preside, and he will be working from home. He has asked all his files to be taken to him in the house. He will be working from home today,” he said.
The minister said the vice-president would later in the day visit the president at home.
Buhari’s inability to preside over the FEC meeting for the second time in succession has risen concerns about his health condition.

The president was not at a similar meeting penultimate week, but his spokesperson said he was busy attending to other national issues.
Aside Buhari, about 16 other members of the cabinet were absent from the FEC meeting yesterday as the Council Chamber venue of the meeting was half empty.

At 11am which is the official time for the commencement of the meeting, the Chief Protocol Officer came in and briefly conferred with Vice President Yemi Osinbajo.

Immediately after, Osinbajo called for the National Anthem and opening prayers, signalling commencement of the meeting.
Last week, the FEC shelved its meeting on grounds that the secretariat had not resumed from Easter break.

Senior Special Assistant to the President on Media and Publicity, Garba Shehu had told journalists that the meeting was not suspended because of the president’s health condition, insisting that that the president was not sick.

Meanwhile, acting Secretary to the Government of the Federation (SGF), Dr. Habiba Muda Lawal, made her first appearance at the meeting since the suspension of Mr. Babachir David Lawal by the President.

Following President Muhammadu Buhari’s inability to once again preside over the Federal Executive Council (FEC), governors on the platform of the ruling All Progressives Congress (APC) have said they were not worried, saying such meeting is not compulsory for the president.

Addressing newsmen last night after a closed door meeting with the National Working Committee (NWC) of the ruling party, the Kaduna state governor, Malam Nasir el-Rufa’i, who spoke on behalf of other governors said it is a normal thing for the President at the age of 74 to have one ailment or the other.
“We are not worried about the development, it is not compulsory for the President to preside over every Federal Executive Council (FEC) that is why our constitution makes available the place of the Vice President.

“Mr. President is 74 years old, at that age it is possible to have one ailment or the other, even I at 57, I take medication for one ailment or the other. Our prayers is that the president gets better but the reason he has a Vice President is because of a time like this, it may not be as a reason of sickness at he didn’t attend FEC, he may have had other pressing issues to attend to. I have not had to chair every state Executive Council in Kaduna state because the deputy governor is there if I have other issues of greater priority to attend to.

“We are not worried yet or have any reason to be worried but I call on every Nigerian to join all of us to pray for the improve health of the President. It has improved in the last few weeks since he came back and we will continue to pray for his improve health.”
Speaking on what the over two hours closed door meeting reed upon, El-rufai said: “The most important decision is that henceforth we will hold a meeting here at the National secretariat once every month.

“This is with a view to increase the interaction, foster relations between the National and state branches of the party as well as work towards strengthening the party. We also took certain resolutions and the first is that the Progressives governors have committed to work accideously at strengthening and rebuilding the party and ensuring reconciliation and unification of the party at all levels.

“We have committed to providing the NWC all the support that they need. We will also engage in fund raising from our donors, sympathizers of the APC to ensure that the National headquarters of the party and indeed all organs of the party have the wherewithal to continue with the difficult work they have been doing within the party.
“The joint meeting between the NWC and the governors also resolved to that at our next meeting, we are going to look at the arrangements for the midterm convention and put in place the resources necessary needed to ensure that the convention held as required by our party.

“The governors reinstate their loyalty to Mr President, the Vice President and all our leaders of our party will enjoin Nigerians to continue to pray for the improved health of the President. We are proud as a party and as governor is that party with the Progressives that the state governments under the APC have recorded in the last few months and the increasing performance of the federal government at the National level. The governors will continue to advance the course of good governance, fighting corruption, improving security in our country,” he said.

Absentee Buhari Hits Back At Jonathan Through His Spokesman, Says ‘Corruption Was Uninhibited Under You’