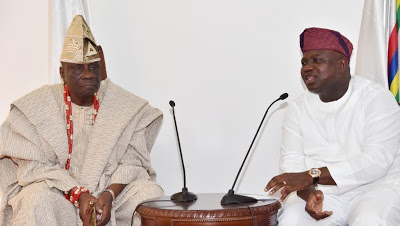 Oba of Lagos, Oba Rilwan Akiolu, has told politicians in Lagos state not to bother to contest against the incumbent governor, Akinwunmi Ambode, in 2019. The monarch said this when he spoke at the 21st convocation of Lagos State University (LASU), Ojo Lagos state on Wednesday.According to Oba Akiolu, Ambode has so far done well and should not be hindered to continue his works for another four years.

l“Few days ago, one of the aspirants greeted me. After greeting, he alleged that I halted his ambition. No one should come out in 2019 and declare his ambition. The only way to avoid not wasting their money is to support Ambode and his deputy to rule Lagos for the next six years. That was why about nine months to the 2015 governorship election, I said Ambode would be the next governor whether they vote or not”he said