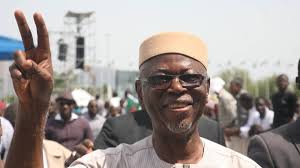 The All Progressives Congress (APC), Ebonyi chapter, has begun a reconciliatory move aimed at reconciling aggrieved members ahead of the 2019 general election.

Pastor Eze Nwachukwu, Ebonyi APC Chairman, who spoke in an interview with the News Agency of Nigeria (NAN) on Wednesday in Abakaliki, said that zonal committees were set up to reconcile the aggrieved members.

According to him, the move would reposition the party and ensure it comes out strong in the 2019 general election as well as enhance the unity and progress of the party in the state.

“We inaugurated the three zonal committees with a charge to reach out to all aggrieved members who, for one reason or the other, left the fold during the leadership crisis.

“As we gradually approach the election year 2019, it is imperative that we put our acts together by ensuring unity and progress of the party, without which we can hardly wrest power from the ruling party.

“The reconciliation exercise is a mile stone achievement, and I am happy that the move was embraced by party elders and stakeholders, ” Nwachukwu said.

He said the committees were equally directed to study the earlier report of another committee on reconciliation, headed by Chief Mike Okoro, in order to be properly guided in the assignment.

“The committees are expected to take the message of peace, love and unity to these aggrieved members in their various zones and woo them back to the party.

“The initiative is to restore the unity, oneness and love that once existed in the party and I have confidence in the ability of men and women saddled with the responsibility, “he said.

Nwachukwu said that the committees have two weeks to submit their reports.

He added that the party was yet to decide on whether or not to participate in the forthcoming Ebonyi local government council elections.