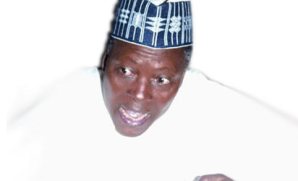 Second Republic lawmaker, Junaid Mohammed, has subtly advised the Nigerian Senate to impeach President Muhammadu Buhari who seems to be “incapacitated and unable to discharge his duties as President of Nigeria.”

Reacting to the news of Buhari extending his vacation indefinitely, the elder statesman admonished Nigerians to rise up against the President’s action of keeping them in the dark on his health status should the senate fail to impeach him.

He asked the President to tell Nigerians the truth about his health status.

Recall that the President who was billed to resume duty on Monday, following a 10 day vacation had yesterday announced the extension with no dates of return.

But the elder statesman in his reaction claimed that a cabal had started working to hijack the government.

He urged Nigerians to be vigilant in order to prevent the reoccurrence of what happened during the administration of late President, Umaru Musa Yar’Adua, when his wife and some politicians allegedly hijacked government.

According to Mohammed, “The development regarding the President’s health is a very bad indication and it is unfortunate Nigeria has found itself in another quagmire. It is also unfortunate that Buhari and his handlers are trying to cause another constitutional crisis rather than telling Nigerians the truth. This development is similar to that of Yar’Adua when a cabal with the help of his wife held this country to ransom and deceived Nigerians.

“During Yar’Adua’s administration, 180 million Nigerians were taken for a ride. The same people in the Villa under Buhari have started towing the same path. I believe Nigerians should rise up against this if the Senate cannot impeach the President who now seems to be incapacitated and unable to discharge his duties as President of Nigeria.

“It is now seen that the cabal do not want an end to this and that is why they keep playing us. These are some of the things we have seen ahead and have been shouting that Nigerians should be told the truth about the President’s health. I pray God saves Nigeria but Nigerians must take their own destiny into their hands.”