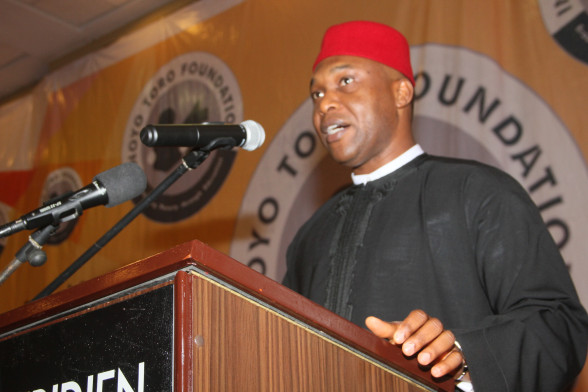 He argued that their departure will provide the true members of the PDP with the opportunity to restore the moral compass of the party and return it to the glorious vision of its founding fathers.

He added that those leaving PDP to join APC are political jobbers, people with no character, people with no principles, and most importantly they are people who have never won any free and fair election in Anambra state.

Chidoka said “we are happy to hand such persons over to APC, because anybody that is a PDP member would know that PDP represents what the Igbo man wants.

The Nigeria project has room to accommodate everyone, and all ethnic groups in the country must be equal stakeholders in the Nigerian government. PDP is the only umbrella that can bring everyone together and give all Nigerians a sense of belonging”

Speaking at his country home in Obosi on Thursday, at a meeting of Obosi ward Executives and selected stakeholders of PDP in Idemili North Local Government in Anambra state, the former Minister reiterated that he and other leaders of the PDP (who are the true representatives of Ndi Anambra) will remain in PDP, knowing that the umbrella represents equity and hope for the Nigeria of our dream.

In a statement by his media aide, Ikechukwu Okafor, Chidoka stated that Anambra is a PDP state and has always been a PDP state. He recalled how Chief Alex Ekwueme brought the message of PDP back to Anambra state and it was welcomed and widely accepted and its acceptance saw the PDP winning all governorship seats in the South East.

He said PDP is rooted and strong in Anambra state and his message to Anambra people is that come 2018 PDP will take back the government house of Anambra state.

The former Corps Marshal of the Federal Road Safety Commission, also described the All Progressives Grand Alliance, APGA, as a franchise of the PDP.

Responding, the Idemili North PDP chairman Mr Alex Iremeka expressed gratitude that Chidoka who is one of the foundation members of the PDP in Anambra state reaffirmed his commitment to the party.

Mr Iremeka reiterated the message that the PDP is the true umbrella to bring equity in Nigeria irrespective of ethnicity, gender, and economic class.

He promised that the PDP government will return Nigeria to the 7% growth recorded under the Obasanjo/Yar’Adua/Jonathan era instead of this recession under the APC government.

US Warns Citizens Against Visiting Gambia