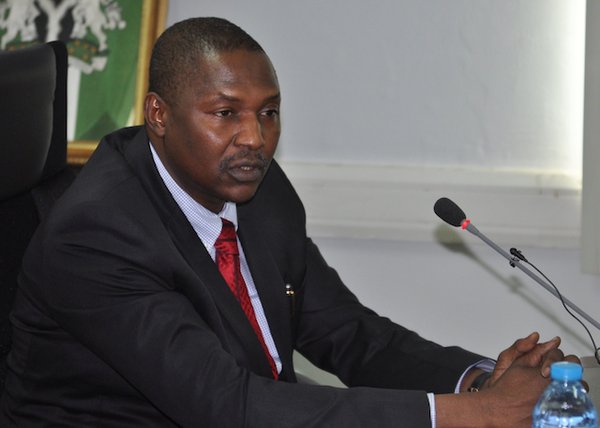 The Attorney-General of the Federation and Minister of Justice Abubakar Malami met behind closed-doors with President Buhari on Monday.

Malami, who had been instructed to investigate the involvement of any top government officials accused of any wrongdoing, declined addressing journalists who sought to know what he discussed with Buhari.

A statement yesterday by the Senior Special Assistant on Media and Publicity to the president, Garba Shehu said any of the top officials accused of corruption will not escape prosecution if found liable.

The statement said President Buhari remains relentless in his fight against corruption.

“The attention of the Presidency has been drawn to a number of reports in the media, in which various accusations of corruption have been levelled against some top officials in the administration.

“In that regard, President Buhari has instructed the Attorney General of the Federation to investigate the involvement of any top government officials accused of any wrong-doing. If any of them are liable they will not escape prosecution,” the statement said.

The Senate last week accused the Secretary to Government of the Federation (SGF), Mr. Babachir David Lawal of corruption in the award of contracts at the Presidential Initiative on North East (PINE).

A report by the Senate ad-hoc committee on mounting humanitarian crisis in the North east headed by Senator Shehu Sani (APC, Kaduna Central) indicted the SGF in a N2.5billion fraud at PINE. Following Babachir’s indictment by the panel, the Senate resolved that he should resign and face prosecution for alleged fraud. The Senate also said it would provide evidence against Babachir to President Buhari.

The Senate also last week declined confirmation of the acting chairman of the Economic and Financial Crimes Commission (EFCC), Ibrahim Magu. Senate based its decision on a security report from Department of State Security (DSS), which indicted Magu of financial misconducts.

The report said Magu failed integrity test and would constitute a liability to the anti-corruption fight of the Buhari administration if confirmed head of the EFCC.