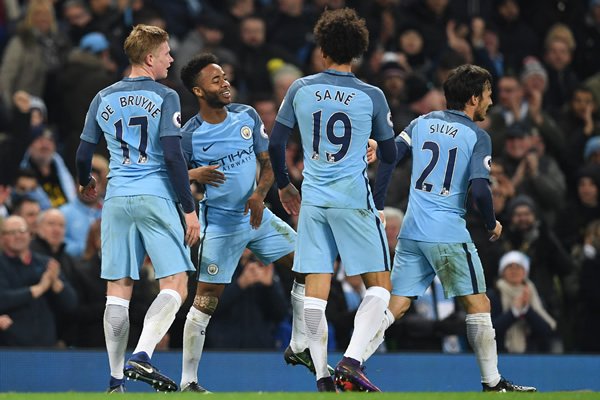 Manchester City breathed fresh life into their Premier League title challenge as they came from behind to secure a crucial 2-1 win over Arsenal.

Pep Guardiola’s side recovered from Theo Walcott’s early opener as second half goals from Leroy Sane and Raheem Sterling delivered the knockout blows in a heavyweight clash at Eastlands.

City’s second win in five days lifted them into second place and closed the gap on leaders Chelsea to seven points ahead of the busy Christmas period.

But it took Arsenal only five minutes to expose City’s soft centre as Alexis Sanchez caressed a fine pass behind Otamendi to Walcott, who dispatched a cool finish past Claudio Bravo from close-range.

City’s territorial dominance was rewarded in the 47th minute when David Silva’s pass picked out Leroy Sane and the German winger beat the offside trap to slot home.

Unable to stem the tide, Arsenal needed a series of saves from Petr Cech to keep them level, but the Gunners defence was finally breached again in the 71st minute when England forward Sterling beat Cech at his near post.