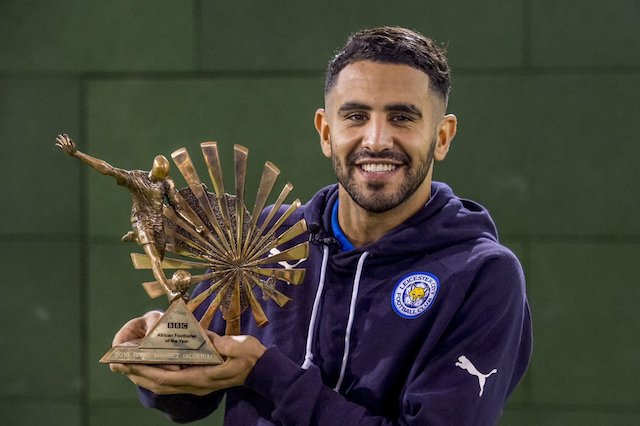 Riyad Mahrez was on Monday crowned the BBC African Footballer of the Year 2016.

Fans from across the world voted for the Algeria and Leicester midfielder ahead of Pierre-Emerick Aubameyang, Andre Ayew, Sadio Mane and Yaya Toure.

Winger Mahrez, 25, after receiving the award said “It means a lot, it’s something big for African players so I am very happy, I am very proud.

It’s always good to receive awards and for African players it’s a huge honour. To all the fans, thank you very much.
He added: “Also I want to thank the Algeria fans and dedicate this to them as well and for my family.

“I just have to carry on and keep going with my football and see what I can do.”

The award caps an exceptional year for Mahrez, who had already won the English Premier League title and was voted Professional Footballers’ Association Player of the Year.

It is further recognition for his outstanding form as Mahrez, whose family comes from the small town of El Khemis in Algeria, took the Premier League by storm.

He was a driving force in Leicester City’s shock title triumph, scoring 17 goals and providing 11 assists as the Foxes pulled off what had been a 5,000-1 shot before the season.

Leicester manager Claudio Ranieiri was in attendance as Mahrez received his award and paid tribute to the winger.

“I want to see him continue as a fantastic player. It’s very important for us, for the team. He is improving every day,” he said.

My Statement Was Taken Out of Context – Says Sports Minister, Solomon Dalung