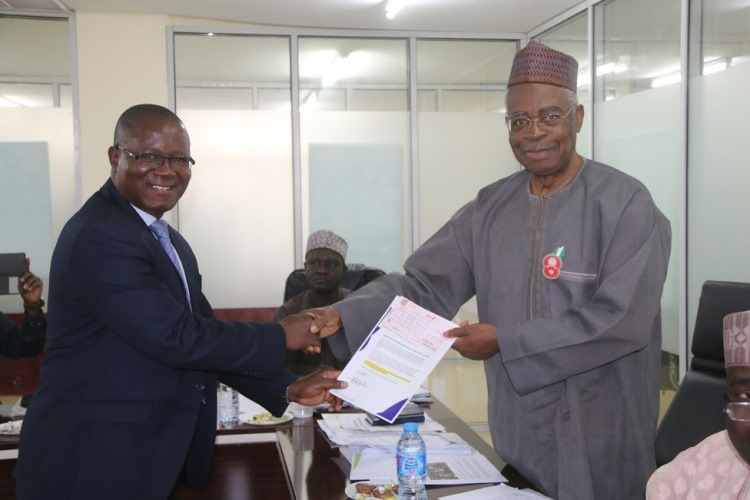 The Presidential Committee for Victims Support Fund has a received a donation of 1,071,250 Naira from Air Commodore DE Abdullahi RTD of the Alumni Association of the National Defense College, Nigeria. Abdullahi had made a pledge to donate 25 percent of the proceeds of his book launch earlier in the year. He delivered the cheque during the VSF’s last meeting of the year, Chaired by General TY Danjuma today in Abuja. This was revealed in a press statement released to the media by the Spokesperson of the Committee, Alkasim Abdulkadir.

In his reaction an elated Gen Danjuma said he was impressed that the donation was done voluntarily and he further advised the members of the general public to replicate the kind gesture of Abdullahi to alleviate the suffering of the IDPs in the North East.

According to Air Commodore Abdullahi the book “gives the historical and global perspective and Nigeria as a country with analysis on the events that have occurred alongside the personalities, victims and most importantly how we can assist in reducing the incidences of terrorism in the entire country”

In attendance at the presentation were other members of the Committee -the Vice Chairman of the VSF/PCNI Alh. Tijjani Tumsah, the DG of NEMA Alh. Sani Sidi Mohammed, the Executive Secretary of the National Human Rights Commission Prof. Bem Angwe, the President of the National Council of Women Societies Mrs Gloria Shonda Laraba Shonda, AIG in charge of Operations Salisu Fagge, the Chairman of Borno State Humanitarian Response Committee, Dr. Bulama Mali Gubio and the ED of VSF Dr. Sunday Ochoche.