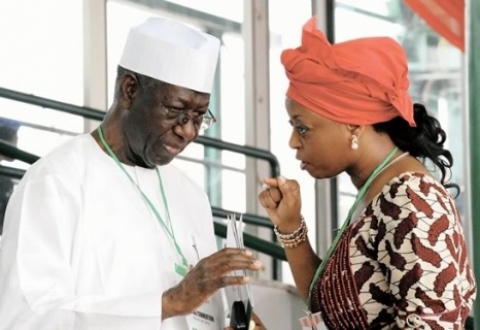 Anenih stated this in his book, titled ‘My Life and Nigerian Politics,’ which was presented in Abuja on Saturday.

Anenih, who served as the Minister of Works and Housing between 1999 and 2002, said Abubakar became too ambitious during the build-up to the 2003 presidential election in which Obasanjo was seeking a second term.

“As a result of my preparations for Chief Obasanjo’s second tenure, I stepped on the toes of many of those who did not want him to seek a second term. These are the people I can now refer to as members of the ‘G3’. These were General Ibrahim Babangida, (ex-) Vice- President Atiku Abubakar and the (ex-) National Security Adviser, General Aliu Gwarzo.

“There was no other way I could have offended the vice-president other than that I prevented him from being PDP’s presidential candidate in the 2003 presidential election. He erroneously believed that he was the only politician at the Villa and that he was better qualified than the President. I was well ahead of him in all his plans to prevent Chief Obasanjo from running (for re-election).”

Anenih, however, noted that after blocking Abubakar, the former vice-president also ensured that he (Anenih) lost his position in Obasanjo’s cabinet.

The former PDP BoT Chairman also claimed that he was the one who made Atiku second-in-command in 1999.

He said after the PDP presidential primary of 1998, the then Chairman of the party, Solomon Lar, recommended three northerners to be Obasanjo’s running mate.

Lar was said to have told Obasanjo that Rimi was his preferred candidate but Obasanjo wasn’t convinced.

Anenih, according to the book, then advised Obasanjo to pick Atiku, who had just won the governorship election in Adamawa State and was waiting to be sworn in.

“He answered that he would like to sleep with his two eyes closed. It was at this point that I asked him: ‘What about Atiku?’ Chief Obasanjo’s answer was that Atiku had just won his governorship election and the law might not allow him to come on board as his running mate.

“We both decided to get a lawyer to advise us and Barrister Alimi Rasaq of Kwara State was sent for. He advised us that there was nothing in the constitution that prevented Atiku from being his running mate; especially as Atiku had not been sworn in.”

Meanwhile, the deputy National Publicity Secretary of the All Progressives Congress, Timi Frank, has advised Chief Tony Anenih, to quietly retire from politics instead of trying to rewrite history.

Frank urged the former Chairman of the Board of Trustees of the Peoples Democratic Party; to end his quest for “cheap popularity at old age.”

The APC Chieftain was responding to comments made by Anenih in his autobiography entitled: “My Life and Nigerian Politics”, in Abuja, on Sunday.

Anenih had in the book, claimed that he blocked former Vice President Atiku Abubakar from becoming President in 2003.

He said, “There was no other way I could have offended Vice President other than that I prevented him from being PDP’s presidential candidate in the 2003 elections.”

Frank challenged the former PDP BoT chairman to tell Nigerians “one good thing” he will be remembered for as he retires from political stage.

The APC chieftain said the former Minister of Works was not entirely truthful in his account of the events leading up to the 2003 presidential elections.

According to him, Atiku enjoyed the support of 22 out of Nigeria’s 36 state governors to run but that Atiku being the loyal deputy that he was decided it would best serve the nation’s democracy to decline the offer and back President Obasanjo instead.