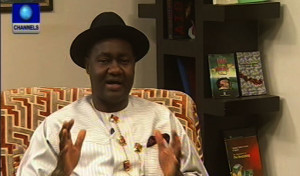 The All Progressives Congress, APC candidate for the rerun election in Rivers South-East Senatorial District, Senator Magnus Abe, has questioned the investigative hearing by the House of Representatives on incidence of violence before the botched rerun elections in March this year.

Senator Abe is also accusing the leadership of the lower chamber of the National Assembly of working to advance the interest of the Peoples Democratic Party, PDP, in the rescheduled rerun elections on December 10.

In a letter addressed to the Speaker, Yakubu Dogara, Senator Abe, alleged that the PDP was using the leadership of the House to unduly interfere in federal agencies in a bid to use them to influence public opinion ahead of the forthcoming polls.
He acknowledged receiving a letter of invitation from the House Committee on Army to attend a public hearing of a petition by the South-South Zone of the Civil Liberties Organization against the Nigerian Army.

The former Chairman of the Senate Committee on Petroleum Downstream said it was not surprising that the petition against the Army was signed by Livingstone Wechie.

He described the author of the petition as the arrowhead of the campaign of calumny against the APC in Rivers State by Governor Nyesom Wike.

Senator Abe informed the Speaker of the House that Wechie was the Vice Chairman of the Rivers PDP 2015 campaign publicity team.
Magnus Abe also recalled that the same Livingston Wechie was the pilot of what he described as infamous Integrity Group that sponsored a petition against former governor and Minister of Transport, Rotimi Amaechi in a failed bid to stop his ministerial confirmation by the Senate.

The letter reads: “I am in receipt of a letter of invitation from the House of Representatives Committee on the Army dated the 20th day of October, 2016, inviting me to attend a public hearing of a petition by the Civil Liberties Organization South-South zone against the Nigerian Army. Not surprisingly Mr. Speaker, the petition is signed by Mr. Livingstone Wechie, the arrowhead of Governor Wike’s campaign of calumny against the APC in Rivers State.

“He is the Vice Chairman of the Rivers PDP campaign publicity team. He was the pilot of the infamous Integrity Group that sponsored the petition against Rt. Hon Chibuike Rotimi Amaechi in the Senate and he is also the plaintiff in the suit to stop the swearing-in of Hon. Victoria Nyeche, APC member-elect of the Rivers State House of Assembly.

“Mr. Speaker sir, I have read through the said petition and it is clear that the petition sponsored through your office is nothing but an ill-disgusised attempt by the Peoples Democratic Party to manipulate federal agencies and influence public opinion in order to secure undue advantage for the PDP in the coming rerun elections. There has been a clear and consistent pattern of the Peoples Democratic Party which ordinarily should have been the minority party using the National Assembly to tilt the political scales in Rivers State in their favour at decisive moments.

“Out of respect for your revered office and the integrity of the National Assembly, an institution to which I proudly belong, I had opted to hold my peace, but in the face of glaring injustice and continuing manipulation of the powers of the National Assembly in favour of the Peoples Democratic Party in Rivers State, it has become imperative that I bring this to your attention and to the attention of the national chairman of the APC.

“Mr Speaker, it is sad to note that every intervention of the National Assembly in Rivers State usually begins with a boast by the Peoples Democratic Party led by Governor Nyesom Wike announcing the involvement of the National Assembly. Thus far, actions of the House of Representatives are tailored towards achieving a clear political advantage for the Peoples Democratic Party.

“This latest hearing instituted by your office is just another desperate attempt to embarrass the Nigerian Army in furtherance of the PDP agenda. If that were not the case, what is the point of inviting me and Hon. Barinaadaa Mpigi, the APC candidates in the rerun elections. Are we soldiers? The Peoples Democratic Party in Rivers State has already instituted a narrative to link the APC to the activities of soldiers and you have now been recruited to provide the visual images for the PDP campaign in Rivers State.

“These hearings are a clear abuse of the constitutional powers of the House of Representatives and a violation of your oath of office wherein you swore to do right to all Nigerians. The speaker of the House of Representatives cannot be a speaker for only PDP in Rivers state and this is made even more painful when we remember that you were elected on the platform of the All Progressives Congress, (APC), the Party you are now using the enormous powers of your office to persecute.

“It is disheartening that petitions of APC members to the office of the speaker have received no attention from your office but every action of the House of Representatives as announced by Governor Nyesom Wike is implemented to the letter. For the first time in the history of our country, members of the house of assembly elected on the platform of a political party are denied the right to participate in the affairs of the Rivers State House of assembly. Their constituencies are denied representation simply because they voted for APC. This has elicited no response whatsoever from your office.

“It is instructive to note that these hearings always come up whenever the Rivers rerun elections are slated, and this particular invitation I have received is no different.

“In the circumstances therefore, I am unable to honour this invitation and I urge you to refrain from taking any further action designed to influence the outcome of the forth-coming elections in Rivers State in favour of any political party. I pray that God in his mercy will give you wisdom to face the real challenges of our country.”