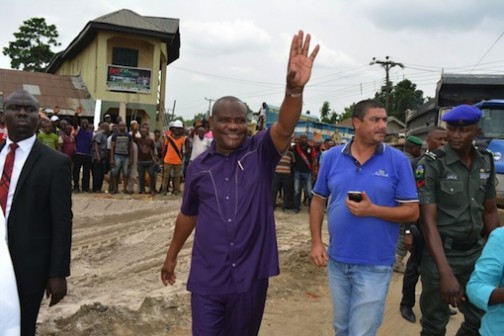 The statement signed by Mr Simeon Nwakaudu, Special Assistant to the Rivers State Governor, Electronic Media, said that Akpabio made the commendation during a courtesy visit to Wike in Port Harcourt.

The senate minority leader commended the governor for transforming the state in the last 17 months. Akpabio, a former governor of Akwa Ibom, noted that through careful planning and the right application of resources, Wike had ensured even development across the state despite the economic downturn.

However, Akpabio urged the Rivers governor to maintain the tempo of development in the state, adding that Nigerians are happy with his giant development strides.

“I am here to commend Governor Wike for his giant development strides across the State; he is a shining light of infrastructural development.

“I urge him to continue to develop Rivers State; this is a governor that has defied the economic downturn to improve the living condition of his people; we are proud of him,’’ Akpabio said.

Responding, Wike said that he remains committed to the rapid development of the state and the empowerment of the people.