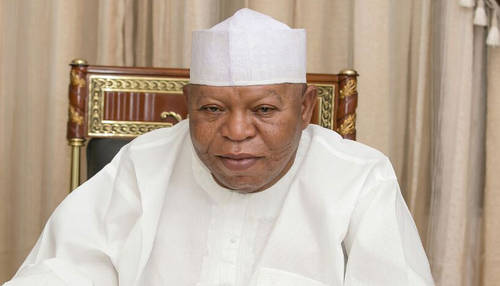 Members of late former Governor of Kogi State, Abubakar Audu’s family are in court over the sharing of his properties.

Abubakar Audu died leaving behind two wives, a daughter and eight sons shortly after the Kogi State gubernatorial elections on the 22nd of November 2015.

His last wife Fatima Abubakar is accusing the other family members of the Kogi-born politician of neglect and intentionally depriving her access to her late husband’s residence and personal effects.

Her counsel Chris Uche (SAN) had applied to the court to join Fatima in the distribution of the estate of the late politician which is supposed to take place under Islamic law at the Sharia Court of Appeal, Abuja.

The letter, dated 17th of August 2016 and addressed to the Honourable Grand Khadi of the Sharia Court of Appeal located at plot 1052, Cadastral Zone, Gudu district of Abuja and duly received on the 28th of August informed the court that Fatima, a surviving wife of the late Igala prince is supposed by law to receive a portion of the late politician’s estate.

DailyTrust Newspaper gathered that the court will be employing an alternative dispute resolution mechanism to settle the issues in dispute among both parties.

After both parties met on the 20th of October, the counsel to Fatima Abubakar refused to speak to the press claiming the Grand Khadi had given instructions that the public be left out of the dispute till it is resolved.

He however, confirmed the case has been adjourned to November 1st, 2016.