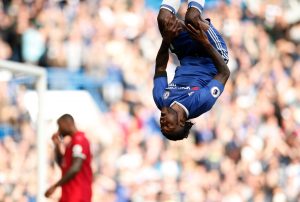 Chelsea FC showed a glimpse of their class as they outclassed Premier League champions Leicester City in the opening game of Week 8.

Goals from Diego Costa, Eden Hazard and Victor Moses condemned Leicester to defeat at Chelsea and meant the Premier League champions are yet to pick up a single point on their travels this season.

Chelsea head coach Antonio Conte will be delighted with the result, but will not be so happy with Costa’s apparent request to be substituted and his angry reaction at being left on.

Leicester were out of sorts as Chelsea overran them in the first half.

Moses sealed the victory with a cool finish inside the area after a cheeky assist from Nathaniel Chalobah.