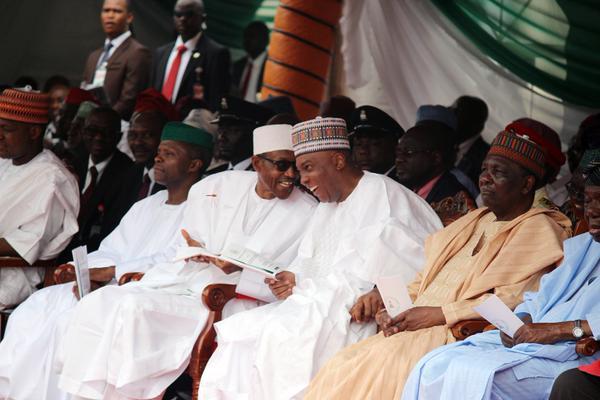 A national leader of the All Progressives Congress, Bola Tinubu, has described the federal government’s withdrawal of forgery charges against presiding officers of the Senate as a welcome development.

In a statement issued in Abuja on Saturday, Mr. Tinubu said the government’s decision would help the APC focus on bringing progressive change it promised Nigerians.

“New legislation will be required to help pull the nation out of the economic mire,” Mr. Tinubu, a former governor of Lagos State, said in the statement issued by his media aide, Tunde Rahman.

“With these forgery charges found not to apply, it is good that they be dismissed so that the national assembly may focus on this important work ahead.”

The Nigerian government of Nigeria on Thursday filed a motion to withdraw the charge of criminal conspiracy against Senate President Bukola Saraki and his Deputy, Ike Ekweremadu.

Messrs. Saraki and Ekweremadu, as well as a former Clerk of the National Assembly, Salisu Maikasuwa, and a former Deputy clerk, Ben Efeturi, were first arraigned before Justice Yusuf Halilu on June 10, 2016 via charge No. CR/219/16.

The government, however, initially amended the charge to prosecute only Messrs Maikasuwa and Efeturi, but later withdrew the entire case.

Messrs Saraki and Ekweremadu had promptly issued a statement on Friday saying the decision was a vindication of their positions that they were innocent of the charges.

But Mr. Tinubu said this was no time for celebration.

“While those involved may understandably feel a sense of relief or vindication, this is no time for them to celebrate or to believe all is well with the nation simply because all has turned out well for them on this matter,” said Mr. Tinubu.

“All is not well. Throughout the nation, the people stagger and groan under the weight of economic hardship. This government and our party must hear and respond to their plea. We must lead the way.”

The former governor also said that a mind unburdened by the specter of possible legal liability is free to devote itself to the pressing matters of state.
“Consequently, this action presents a unique window of opportunity for the national assembly to reset its bearings and to focus on the real issues at hand,” he said.

“History will not look kindly on those involved if they were to squander this fine chance, as never before, Nigerians look to the various arms of government to perform their roles so that the country can walk the path of change and renewal.

“May those who are the beneficiaries of this legal outcome now rededicate yourselves to fulfilling the progressive tenets of the APC and to honoring the promises we made to the people with regard to their governance and well being.

“Now that you have overcome this legal battle, you must dedicate yourselves to helping Nigeria win the greater war against poverty, despair and failure.”