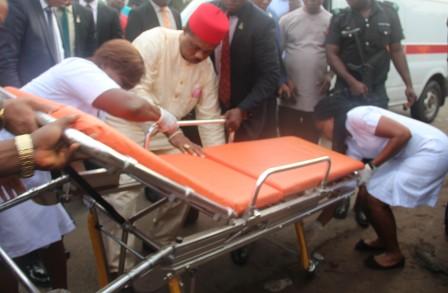 A 911 Lorry with registration number XB 751-PHC yesterday crushed a mother and her grand child to death at IKB Junction, Ejighinandu, near Eke Awka-Etiti along Nnobi-Ekwulobia Express Way in Idemili South local government of Anambra State.

With the corpses of the victims decapitated, heads crushed and the woman’s hand cut off, the children of the woman were crying uncontrollably beside their late mother, while the crowd watched helplessly until Obiano’s convoy coming back from a function at Mbosi arrived the scene.

Anambra State Governor, Chief Willie Obiano who could not hold back tears on seeing the gory site ordered his convoy to take the corpses to Our Lady of Fatima mortuary using the convoy Ambulance.

Amidst shouts of “ewooo… Ezigbo nwanyi a anaa” from the crowd and under the supervision of the governor, his medical team, with the help of his security officers gathered the corpses and took them to the mortuary together with the woman’s son and daughter.

While condoling with the people of Awka-Etiti, Governor Obiano urged them to go about their normal businesses promising to do his best to assuage the pains of the bereaved family.

Obiano also warned careless drivers to stay off Anambra State noting that no live of any Onye Anambra is worth being wasted.

According to eye witnesses, “the 911 lorry, lost its break from Eke Awka-etiti, lost control and crushed Mama Ejima and the baby.”

“Mama Ejima is a popular widow who sells banana to meet up with the pressures of existential survival since her husband left her early,” they added.

We also learnt that the woman just closed for the day and was heading home with her grand child before the accident.