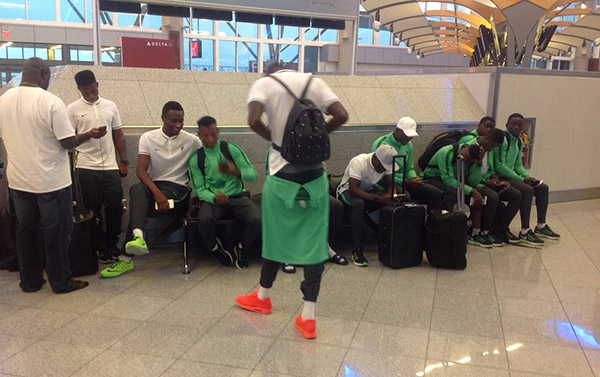 Coach of the National U-23 team, Samson Siasia has said that he’s leaving Nigerian Football for the time being, pending when there is a change in the leadership and structure of Nigerian Football and Sports in general.

Siasia who led the team to win Bronze at the just concluded Olympic Games in Rio, Brazil, made this known in an interview with Vanguard’s Jude Opara.

He explained what led to their being stranded in Atlanta for days, and why the players rejected the first flight that was supposed to take them to Brazil.

He also spoke of efforts of the Vice President, Minister of Information, and Minister of Finance, in solving the crisis during their time in Atlanta.

The minister accused you of child trafficking for taking the team to Atlanta without his knowledge or consent.

How can I take a national team out of the country without their knowledge of the NFF and the Sports Ministry? I really don’t know were that was coming from. We had the plan to travel from Atlanta to Brazil on the 29th of July. But the agent who was handling that did not get us the chartered flight or pay for our tickets, but nothing actually happened and that was when I, on my own, decided to contact an agent, Greg. But the guy said he would not do anything until he saw that the money was paid into his account. After three days, the guy said he was no longer interested and even told other operators not to deal with us that we were not a serious people.

Back at the camp in Atlanta. How was it?

The first 10 days was like a hell because we had to struggle to pay for hotel accommodation and feeding because the person, Bunmi, who opted to assist us did not get the necessary support he expected. But after the fist 10 days the Ministry came through the Nigeria Football Federation (NFF) and paid for our bills. But we were stranded in Atlanta because the money they said they paid to one Poopola for us to travel never came and nobody has heard anything about it.

What was your level of communication with the NFF and the Ministry while in Atlanta?

No, nobody called me from the ministry. The Minister was dealing with Mikel, may be because he was the captain of the Olympic team. But when we had the plane issue, the Vice President called and I spoke with him like two times, the Finance Minister called and indeed the first person to call was the Minister for Information, Lai Mohammed.

I must say he did a nice job to see how to solve our problem because I think the President heard about our plight and instructed that they should find a way to solve the problem. They were, I believe, embarrassed because the issue was even on CNN every time.

However, the chartered flight thing never worked out because the guy they were discussing with called me and we tried to see how to arrange the fight but there was no money sent to him and so it didn’t work out too. So the option we had was to arrive Rio the very day we were to play and that could have resulted in a walk-over of our team.

We had a chartered 36-seater flight that was to take us to arrive Rio by 2 o’clock while our game was at 9 o’clock. But the players were afraid of that flight because it was very small and when we got to the airport, Delta called through the same Bunmi guy.

In fact, they were supposed to partner with Delta but I don’t know what happened. When they heard of our plight they called him to offer a big plane to fly us the next day so as to arrive five hours before the match. Indeed we were already at the airport to fly that small plane which was paid for by a friend of mine, but when the players heard that Delta was coming, they insisted that we should watt for it. In fact they were almost dying out of fear.

When I called Mikel to tell him about the development, he said ‘I beg, please let us wait for tomorrow for the bigger plane which is safer and better’. All the players were happy and excited that we were not going to fly that small plane and perhaps that is the reason they came out to play the way they did with all their mind.

Indeed Delta did a great job. Even when the CBN 46 came to the hotel, we refused to tell them about our problems because it was about Nigeria, even though every thing was already in the public domain. Talking to them would not have changed anything.

Now Delta said the cost of flying us was about $250,000 dollars but that they were not charging us. They said if we had it the money could be paid to any charity organization of mine or Mikel but we have not seen anything and that appears like another fraud. We took pictures with Delta to promote them and thank them for their support.

I am telling you what actually happened. We are still waiting to see where the money that was meant for us to fly to Brazil has gone to. Nobody has said anything. The federal government sent the money to the Nigeria Olympic Committee (NOC) and the NOC said they sent the money to the airline in Florida which up till now they have not received anything, even the airline is planning to sue them for breach of contract because they were supposed to pay some money to them even if they were to cancel the arrangement. That is even another issue. We don’t even know how they are going to settle that.

The Minister categorically said he never knew where you were and that you were engaging in human trafficking, is that true?

(Laughs) I don’t know what he was talking about. When I first heard about human trafficking and such stuff, I was angry because the Minister knew that we were going to Atlanta. If not that they stole my phone, I would have shown to you his text message to me before we traveled.

That day the U-20 defeated us 3-2 in our last warm-up match, the Minister sent me a text that I should come so that we can chat but when I went they said he went to the Villa.

He knew exactly what was going on because there was no way he would not know because the Olympic team is statutorily under his control, it is his baby and that has been the way it is. So I don’t understand why he should say I was engaging in child trafficking.

Would you say that yours trip to Atlanta has been justified?

It would have been a waste of time and effort. I am happy because in spite of all that we went through both here at home and in Atlanta, this is the only team that won a medal for the country.

It felt so good when the Nigerian team was called alongside the Brazilian and German national teams with the Nigerian flag hoisted there, that is what we were talking about, putting Nigeria where so many other countries didn’t have the chance to be and that is why I say that these boys need to be commended for what they did. This is something that money cannot even buy.

It appears that the team has been disbanded because there was no official reception and send forth of the team, so what is the next thing for Samson Siasia?

Personally, I was not really surprised that they did not welcome us because most of them were actually waiting and praying for us to fail but we disappointed them by winning that medal. But most sports loving Nigerians who were not on the saddle came out on their own and they were the ones that really appreciated what we did.

Look at this way, if things were done properly, they should have at least informed the Lagos State government that the Olympic team was arriving so that they could welcome us on behalf of the government but nobody told them anything. There was no connection from the Nigeria Football Federation (NFF) or the Ministry of Sports. They knew we were coming. It was only one staff of the ministry that was sent to take us to hotel.

What is your next step with the National team?

My next step is that I am done with Nigeria for now. You can’t keep going to a place where they don’t appreciate you. It’s not worth it. Sometimes it is not about the money but the approach. They seem not to appreciate the sacrifices. I know how much I have sacrificed since the team began camping two years ago. How can you keep going to people who don’t appreciate you? It does not make sense, so I am done for now. I have to go somewhere else where they will appreciate what I have done and what I can do and pay me the respect that I deserve.

But many Nigerians out there still appreciate you.

I know and that is why I keep coming to do the dirty jobs for them because of my numerous fans out there but I can’t just continue because those fans are not the policy makers. How can you keep toiling for five months without even your salary? Nothing has changed in the last two years. It has been from bad to worse, so we must sit down and do something about the structure of Nigerian football and by extension sports in general. It doesn’t worth it to work with the people running sports now in Nigeria. From the Federation to the sports ministry. They don’t have it and will not give what they don’t have. It feels bad.

Imagine any time they have a problem, they will call on me to come and help but they will use me and later dump me. I have not started any team of the Super Eagles from the beginning, not even one time. I want to thank them very very much. Even before I returned from the Olympics, the only car they gave me, they took it away from my wife. That is just awesome. That is not how to treat someone who was out there seeking glory for the nation. Let them eat their national team.