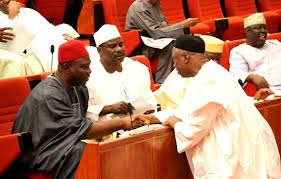 As the conversation on life pension for legislators and former governors continues, many Nigerians have opposed the idea.

The issue of payment of life pension to governors, their deputies, national assembly and house of assembly members has been on the front burner of public discourse in recent times.

In an opinion poll conducted nationwide, the respondents said that the ongoing payment of pensions to former governors should be discontinued.

They noted that the former governors, who are now senators, were by implication, earning double pay.

In Abuja, 17 of the 18 respondents, who returned their questionnaires, opposed life pension for leaders of the legislative houses, while one person supported it. Also, 16 persons opposed governors enjoying life pension, while only two persons supported it.

Similarly, 435 respondents, representing 72.5 per cent, opposed life pension for leaders of the national assembly, while 149 people or 24.8 per cent, supported it.

In the north-east, another 600 people responded in the six states. Four hundred and ninety four, of the sampled population, representing 82.33 per cent, opposed the payment of life pension to legislators, while 58 people or 9.67 per cent supported it.

The survey showed that 426 people or 71 per cent, also rejected life pension to governors, 132 people or 22 per cent supported it, while 42 people or 7 per cent, were undecided.

In south-east, where 100 questionnaires were administered in the five states, 83 respondents voted against pension for legislators while only 12 voted in favour with five respondents undecided.

Similarly, in the north-west, 273 questionnaires were administered in Kano, Kebbi and Sokoto with 126 people or 46.15 per cent rejecting life pension to governors, while 105 people or 38.5 per cent, supported it.

The respondents in the zone also unanimously rejected payment of life pension to leaders of the legislative houses.

Also, all the respondents in north-central voted against life pension to both former governors and the leaders of the legislative houses.

South-South respondents opposed the payment of life pension to ex-governors and legislators.

They argued that they were well paid while in office and in addition, went with handsome severance packages. In the case of legislators, they said:

“Their four-year tenure is too small to attract life pension and moreover, legislators, especially in Nigeria, should be part-time work.”