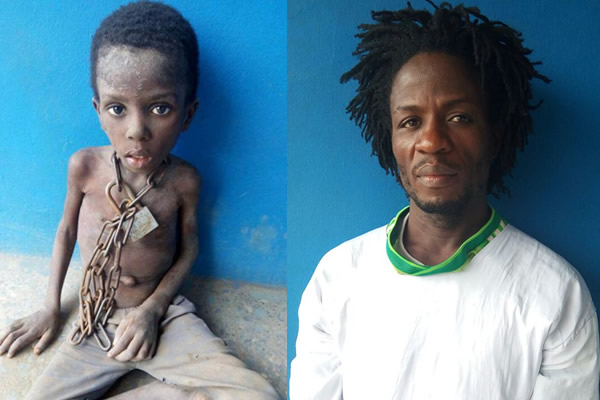 The Ogun State Police Command has arrested the fleeing pastor who chained his son for over a month.

Pastor Francis Taiwo had chained his son, Korede Taiwo, in a room inside the Key of Joy Celestial Church of Christ, Ajibawo, in Ado Odo/Ota Local Government Area of the state.

A team of the police operatives from Onipanu Division of the command and the Nigeria ?Security and Civil Defence Corps, Ota had rescued the victim on Friday.

The NSCDC operatives had gone on surveillance of petroleum pipeline in Ajibawo when neighbours of the pastor informed them about the boy’s ordeal.

They swung into action and arrested Korede’s step mother, Kehinde, who told the police that the father had chained the victim for stealing.

The state Police Public Relations Officer, Muyiwa Adejobi, said Francis was arrested Sunday with the help of the members of the Celestial Church of Christ, Ota.

The police said suspect, a father of five, confirmed that Korede’s mother, Marine Taiwo, who hailed from Delta State is late. And that she had four children for him, two boys and two girls, before she divorced him in 2007, just after she gave birth to Korede.

Adejobi said Francis confessed that he chained Korede because he felt “he’s possessed and he’s not comfortable with his habit of stealing.”

Adejobi said, “According to police investigation, none of Korede’s siblings stays with the pastor.

?”Pastor Francis, who hails from Benin Republic, but born in Ota Ogun State into the same Celestial church, was ordained as a pastor in the church in 2012.

“He was married to two wives before he got married to Kehinde, the step mother to Korede, who is a suspect in the ongoing case with the command.”

Adejobi said the Assistant Inspector-General in charge of Zone 2, Abdulmajid Ali, had directed that the case be transferred to the Anti-Human trafficking and Child Labour Unit of the Command for necessary investigation and actions on the welfare of Korede.