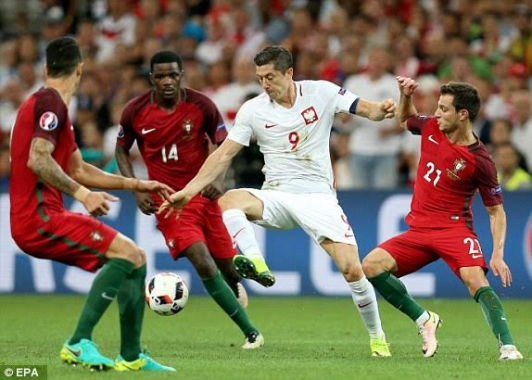 Portugal defeated Poland 5-3 on penalties tonight after playing a 1-1 draw in normal time to advance to the semi-final of Euro 2016.

Lewandowski first opened the scoring in the early stage of the first half with a crisp finish before 18 year old Renato Sanchez equalized for Portugal.
Ronaldo had two good chances to win the game for his country but fluffed his lines resulting in a penalty shootout after extra-time. Ronaldo scored the first goal, Lewandowski scored his for Poland .

The next four penalties were converted by both sides, before Blaszczykowski’s missed from 12 yards leaving Quaresma to place the ball in the net and carry Portugal to the semi-final where they will meet either Wales or Belgium.