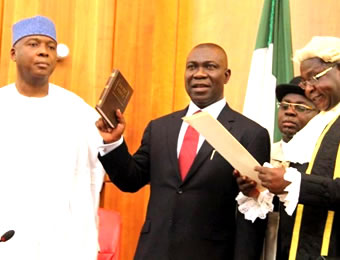 Barring last minute intervention, the embattled Senate President, Dr. Bukola Saraki and his Deputy, Ike Ekweremadu, are scheduled for arraignment before an Abuja High Court sitting at Jabi on Tuesday, on a two-count charge bordering on conspiracy and forgery.

The Federal Government, through the office of the Attorney General of the Federation and Minister of Justice, Mr. Abubakar Malami, SAN, accused the duo of complicity in alleged forgery of the Senate Standing Orders, 2015.

They were charged alongside the former Clerk of the National Assembly, Alhaji Salisu Abubakar Maikasuwa and his deputy, Mr. Benedict Efeturi.

The alleged bogus Standing Order was used to conduct the July 9, 2015, election through which both Saraki and Ekweremadu emerged.

The two lawmakers and their co-defendants are scheduled to enter their plea before trial Justice Yusuf Halilu.

FG maintained that they had by their conduct, committed an offence punishable under Section 97 (1) and 364 of the Penal Code Act.

Specifically, the charge against the defendants, with suit No. CR/219/16, read: “That you, Salisu Abubakar Maikasuwa, Benedict Efeturi, Dr. Olubukola Saraki and Ike Ekweremadu, on or about, the 9th of June, 2015, at the National Assembly complex, Three Arms Zone, Abuja, within the jurisdiction of this court, conspired amongst yourselves to forge the Senate Standing Order, 2011 (as amended) and you thereby committed the offence of conspiracy, punishable under Section 97 (1) of the Penal Code Law.

“That you, Salisu Abubakar Maikasuwa, Benedict Efeturi, Dr. Olubukola Saraki and Ike Ekweremadu, on or about the 9th of June, 2015, at the National Assembly complex, Three Arms Zone, Abuja, within the jurisdiction of this court, with fraudulent intent, forged the Senate Standing Order 2011 (as amended), causing it to be believed as the genuine Standing Order, 2015 and circulated same for use during the inauguration of the 8th Senate of the National Assembly of the Federal Republic of Nigeria when you knew that the said Order was not made in compliance with the procedure for amendment of the Senate Order. You thereby committed an offence punishable under Section 364 of the Penal Code Law.”

The charge was a fallout of investigation police conducted into a petition by a group of lawmakers under the aegis of the Senate Unity Forum, SUF, who alleged that the Standing Order used for the July 9, 2015, election of principal officers for the 8th Senate, was doctored.

Earlier, five members of the All Progressives Congress, APC, in the Senate, Abu Ibrahim, Kabir Marafa, Ajayi Boroffice, Olugbenga Ashafa and Suleiman Hunkuyi, in a suit marked FHC/ABJ/CS/651/2015, sought the removal of Saraki and Ekweremadu.

?The plaintiffs prayed the court to sack the duo on the premise that the version of the Senate Standing Orders that was used for their election was forged. In their suit dated July 27, 2015, the plaintiffs, contended that ?allowing Saraki and Ekweremadu to continue to pilot the affairs of the Senate regardless of the fact that they emerged through an act of illegality, would on itself amount to corruption. ?

Cited as defendants in the suit were Saraki, Ekweremadu, the National Assembly and Clerks of the National Assembly. Though the court had concluded hearing on the matter, however, Ekweremadu, filed a petition before the Chief Judge of the high court, Justice Ibrahim Auta, alleging bias against the judge that handled the case, Justice Ademola Adeniyi. In his petition dated December 18, 2015, Ekweremadu, insisted that Justice Adeniyi was closely related to some chieftain?s of the APC.

He specifically identified the national leader ?of the party and former governor of Lagos State, Ahmed Bola Tinubu as one of the people he said has personal relationship with the Judge. Ekweremadu queried the ability of Justice Adeniyi ?to deliver an objective verdict on the matter in view of his alleged closeness with the APC- the party the plaintiffs belong to.