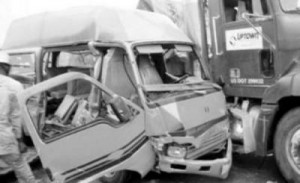 Eighteen people are said to have lost their lives during an accident along the Lagos – Ibadan expressway in southwest Nigeria.

A fuel laden tanker had collided with an 18-passenger bus, killing all the occupants including the driver on the spot.

The accident, which occurred at about 1:00 p.m. on Sunday around Fidiwo-Ajebo axis of the express road, involved a cement truck marked AJG 40 XA, a petroleum tanker truck with registration number RAN 571 XA and a passenger bus marked AGL 373 XR.

Reports say that the fuel laden tanker had attempted to overtake the cement truck at a road diversion point before a head-on collision with the passenger bus which was travelling to Lagos.

He explained that there had been an ongoing repair works along the expressway, which necessitated the road diversion at the point of the crash.

Personnel of TRACE, the Police and that of the Federal Road Safety Corp were at the scene for rescue operation.

Mr Akinbiyi stated that he was not sure whether the corpses of the victims would be taken to a morgue in Ibadan, the Oyo State capital, or that of the Olabisi Onabanjo University Teaching Hospital, Sagamu in Ogun State, until all the dead bodies were evacuated.

“I Am Okay. I Am Better” – Buhari Speaks As He Returns To Nigeria