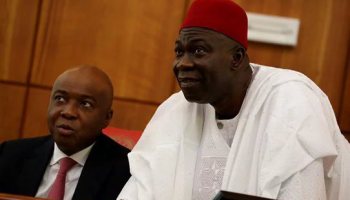 Trouble for Senate President Bukola Saraki is on the way with the resolve of the Federal Government to press forgery charges against him and his deputy, Senator Ike Ekweremadu.

The suit against the two presiding officers of the Senate, which flow from last year’s Senate leadership election, is coming more than a year after police investigations into the alleged forgery of the Senate Standing Rules 2015.

The move was, however, being interpreted in quarters as another dimension in the quasi-battle between the presidency and the legislature directed at paralysing the Senate with the simultaneous prosecution of the two presiding officers.

Also charged with the two presiding officers are the immediate former Clerk of the National Assembly, Alhaji Salisu Maikasuwa and his deputy, Mr. Bennedict Efeturi.

An invitation letter dated June 6, 2016, said to have been written to the two men was as at yesterday yet to be delivered, Ekweremadu, his special adviser on media, Uche Anichukwu said yesterday.

The case followed a petition written to the police by Senator Suleiman Hunkuyi, APC, Kaduna North, on behalf of the Senate Unity Forum, SUF in which he alleged that the Senate Standing Rule, 2015 used in the election of Senators Saraki and Ekweremadu as presiding officers was forged.