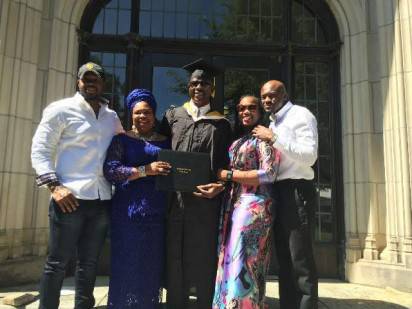 United States legal scholar and an official of the US Department of Justice (DOJ) have provided answers suggesting that Nigeria could successfully request the extradition of Nigeria’s former Minister of State for Defense, Musiliu Obanikoro, who is currently a resident in the US.

The responses from Rutgers law professor, Roger Clark, and DOJ spokesman, Peter Carr, came in response to inquiries by SaharaReporters into Mr. Obanikoro’s legal status with regard to US extradition laws. Both experts’ responses revealed that Mr. Obanikoro is susceptible to extradition should the Nigerian government follow appropriate legal procedures to request for it.

Mr. Obanikoro was again propelled into public attention on Tuesday when agents of the Economic and Financial Crimes Commission (EFCC) searched several properties belonging to him and his family. SaharaReporters confirmed that EFCC agents went into Mr. Obanikoro’s posh Ikoyi estate in Lagos State and seized expensive wristwatches, vehicles, and other valuable items.

Mr. Obanikoro left Nigeria in 2015 shortly after the inauguration of President Muhammadu Buhari of the All Progressives Congress (APC). Since leaving Nigeria, Mr. Obanikoro has been spotted in several places in the United States. Recently is a pictured image of Mr. Obanikoro, who had completed a graduate degree in history at Oglethorpe University in Georgia.

Musliu Obanikoro receiving a degree from Oglethorpe University, Georgia in 2016

Asked whether the United States government would extradite an American citizen to a foreign country where they had allegedly committed a crime, Mr. Clark stated that “the United States has no problem extraditing its nationals provided there is a treaty.”

Mr. Clark added that some countries in Western Europe are reluctant to extradite their own citizens, but added that “common law countries” do not usually have a problem assuming legal processes are followed.

According to Mr. Clark, common law countries including Nigeria will often fall under the same treaty that outlines reciprocal and mutually agreed on rules for extraditing their nationals. The legal expert pointed out that the treaty was signed into force in 1935 when Nigeria was still under colonial control by Great Britain and that it remains in effect today.

The treaty provides a litany of crimes that qualify for extradition, including fraud, fraudulent conversion, obtaining money or goods by false pretenses, forgery, offenses against bankruptcy law, and bribery.

Mr. Obanikoro dares Nigerian government to extradite him from the US. In the interview he said “they [Nigerian authorities] will never attempt any extradition. I, Musiliu Olatunde Obanikoro, am inviting EFCC to petition America to extradite me to Nigeria. The whole world would now see their charade for what it is.”

Mr. Obanikoro then complimented the US judicial system saying “in Nigeria, you’re either on this side or the other side. But this American system is unbiased. They’re neither for me nor for them. So, let them bring the tissue of lies that they have put together and submit everything to serious judicial scrutiny and let us see whether it will fly. I am inviting them to do that.”

Mr. Obanikoro’s latest comments follows a barrage of Tweets following the EFCC raid of his posh Ikoyi residence. In his Twitter rage Mr. Obanikoro again stated his confidence in the US justice system and accused the EFCC of spreading rumor and that President Buhari was a despot.

SaharaReporters could not reach Mr. Obanikoro for comment on this report.