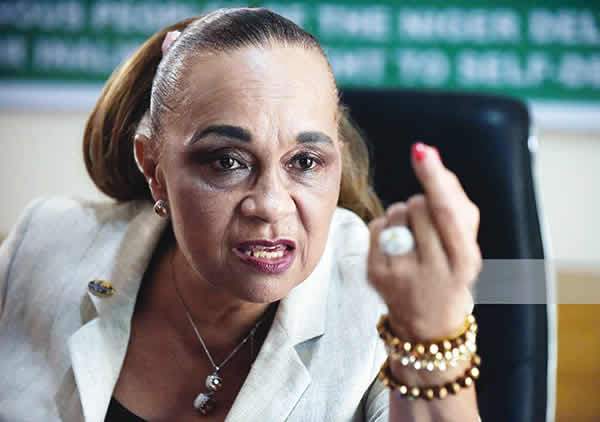 A rights activist, Annkio Briggs, has denied a report that she condemned the activities of the Niger Delta Avengers, saying she “will never oppose anyone agitating for the development” of the region.

Ms. Briggs was reacting to a report published by online platforms (NOT NewsWireNGR) on Monday which suggested she had criticized the group while speaking at a forum in Enugu, the Enugu State capital, on Sunday evening.

The report, sourced from the News Agency of Nigeria, also quoted Ms. Briggs as saying that the Avengers, a group that has claimed responsibility for multiple attacks on oil and gas installations since February, are from Somalia.

In a telephone interview with PREMIUM TIMES on Monday night, Ms. Briggs denied making the statements attributed to her, saying the comments had earned her widespread condemnation.

“I can tell you categorically that I never condemned the Niger-Delta Avengers because doing so would mean I am condemning those agitating for the development of my region,” Ms. Briggs said. “I only pointed out the hypocrisy of the federal government that said Fulani herdsmen came from Libya but Avengers are Ijaw.”

“I said if the government could claim that the Fulani herdsmen are from Libya, why can’t they say the Avengers are from Somalia because of the pirates activities in that country? Why were they so quick to label the Avengers as being Ijaw people? And is Ijaw the only ethnic group in the Niger-Delta?” Ms. Briggs queried.

Ms. Briggs said although she “had no idea about the identities of those calling themselves the Avengers”, she had continued to urge them to embrace dialogue with the Nigerian government.

“It is wrong for anyone to suggest that I will condemn the Avengers when I don’t even know them. I only know that they’re fighting the plight of the Niger-Delta people and I have called on them to cease the attacks and come to the table for dialogue.”

Ms. Briggs said the Avengers’ decision on Monday to move closer to talks by giving conditions for dialogue with the government, was “a welcome development” because “it showed that they can toe the path to a peaceful resolution of the age-long crisis”.

PDP Got Sheriff To Preside Over The Affairs of The Party, They’ve Kicked Him Out But He Is Not Going Without A Fight