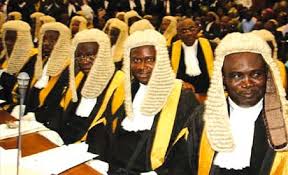 Aside recommending their compulsory retirement, NJC, said it has in exercise of its power under Paragraph 21 Sub-Paragraph (d) of the Third Schedule of the 1999 Constitution of the Federal Republic of Nigeria, as amended, suspended the two Justices from office with immediate effect.

The council which is headed by the Chief Justice of Nigeria, CJN, Justice Mahmud Mohammed, said it took the decision at the end of a meeting it held on April 13 and 14.

NJC okayed Justice Gbaja-Biamila’s sack after it found out that he delivered judgment in a matter that was before him, twenty-two months after written addresses were adopted by all the parties and thirty-five months after the close of evidence in the suit.

The council said after it investigated a petition that was lodged before it by Mr. C. A. Candide Johnson, SAN, it concluded that the action the judge took in suit No ID\1279\2007 P. K. Ojo Vs SDV & SCOA Nigeria Plc, was contrary to constitutional provisions that judgments should be delivered within a period of 90 days.

According to a statement by the Acting Director of Information at the NJC, “His Lordship did not publish a copy of judgment he delivered on 24th December, 2013 until after 40 days, contrary to the provision of the Constitution which required that a copy of the Judgment of a Superior Court of Record be given to Parties in the case within 7 days of delivery.

“That the Hon. Judge continued to hear the Suit in his Court after he had been notified of the pendency of a Motion for a Stay Of Execution at the Court of Appeal and that an appeal had been entered. ?”Prior to the issuance of the first writ of attachment, the Court Registrar under the direct administration of the Hon. Judge falsely misrepresented to the Deputy Sheriff in a memo dated November 28, 2014, that there was no Appeal or Motion in the case file as at November 28, 2014.

“Meanwhile, there were two Notices of Appeal and two Summons to settle Records in the Court’s file. “That the Hon. Judge gave an Order on February 23, 2015 upon an Ex-parte application substituting the name of SDV Nigeria Ltd with Bollore Logistics Nigeria Ltd without serving the Order of substitution on the affected party or its legal representatives. ?”That the Hon. Judge failed to maintain Professional competence required to preserve the integrity of the Judiciary. ?”The above allegations constitute misconduct contrary to Section 292 (1) (b) of the 1999 Constitution of the Federal Republic of Nigeria, as amended and Rules 1.3, 3.3, 3.4 and 3.7 of the 2016 Revised Code Of Conduct for Judicial Officers Of the Federal Republic of Nigeria”.

Similarly, NJC, said it found two other judges of the High Court of Niger State, Justices Evuti and Tanko Yusuf Usman guilty of allegations that they falsified their dates of birth. It said the Judges were indicted on the basis of a petition filed against them by one Mohammed Idris Eggun.