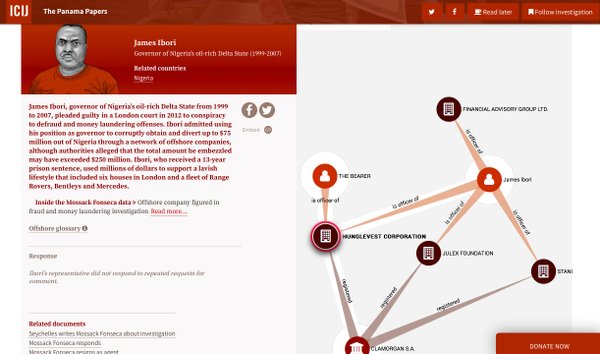 ActionAid Nigeria, an anti-poverty agency, has described the revelations contained in the Panama Papers in relation to Nigeria as a vindication of its calls on the Federal Government to review and where necessary cancel restrictive tax treaties.

The Panama Papers are a large-scale leak of files belonging to Mossack Fonseca, a law firm in Panama. The documents, released by the International Consortium of Investigative Journalists (ICIJ), provide details of secret financial dealings of many political leaders and other individuals and corporations across the world.

Country Director of ActionAid, Ojobo Ode Atuluku, said: “The disclosure through the Panama Papers that some privileged persons and corporations some of whom might be Nigerians, who are in positions of authority, are involved in questionable tax practices through the use of offshore tax havens, makes the need to review Nigeria’s tax laws and treaties even more urgent.”

She also said, “Considering that ActionAid has recently drawn attention to the challenges posed by the unfair tax practices of foreign multinational companies in developing countries through our Leaking Revenue report and ‘Mistreated: How shady tax treaties are fuelling inequality and poverty’, the Panama Papers has further revealed the participatory role of multinationals in running down the economies of developing countries. The single story of corruption amongst African leaders being the cause of economic woes can no longer be sustained. The multinationals are heavily involved.”

Meanwhile, on Monday, the Federal Government through the Minister of State for Budget and National Planning, Mrs Zainab Ahmed, made known its plans to review the country’s existing tax incentive policies at the conference of African Ministers of Finance and Economic Planning in Addis Ababa, Ethiopia.

Welcoming the Federal Government plans, ActionAid’s Country Director however cautioned that, “With incentives and waivers alone costing Nigeria’s national budget some $2.9bn annually, the country must take into cognizance the fact that the international tax system is broken; that it doesn’t work for countries like ours, and fixing it requires concerted global action. Also, the Government should learn from past experience and include Civil Society Organisations in the review process.”

ActionAid Nigeria therefore called on the Federal Government to revisit the recommendations of the Mbeki Panel on Illicit Financial Flows from Africa and to get other national governments on the continent to act on it. Additionally, the Country Director said: “The relevant Federal Government agencies need to investigate the revelations contained in the Panama Papers further, and violators of Nigeria’s tax laws must be held accountable. Moreover, tax treaties must be renegotiated to ensure that multinational companies start paying their fair share of tax.”

At The Invitation of Xi Jinping, President Buhari Will Be Leaving To China