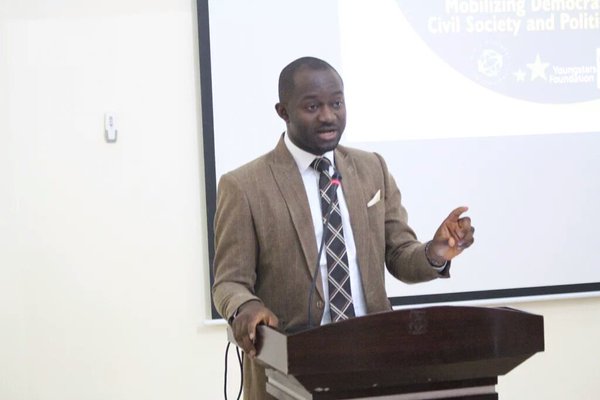 Professor Wahira, a lecturer in the University of Port Harcourt returned from the state Headquarters of the Independent National Electoral Commission (INEC) to find his wife and kids on their knees. Since, it was lent, daytime devotion is expected and welcome. The no-nonsense Professor of Biochemistry had gone to reassure the Resident Electoral Commissioner of his commitment to serve as a returning officer in the #RiversRerun elections despite threats and intimidations from different quarters. On closer contact with his wife and kids, he discovered this was no prayer session instead his family members were kneeling down, beseeching God and his ancestors to beg him to refrain from partaking in the #RiversRerun elections. Crying their eyes out, they begged him not to die for a country that cares little for its citizens. His daughter Wanjiku cried ‘it is better to die a glorious death than to die like a chicken during an election that is not worth our vote’. His kids narrated how they received threat text messages ordering them to inform their dad to refrain from participating in the elections or risk death. Of course Professor Wahira heeded his family’s plea and declined participating as a returning officer in the March 19th Rivers rerun elections.

Wahira was just one out of several election personnel who received verbal or written threats, intimidation ahead of the rivers rerun. In fact, some staffers of University of Port Harcourt recruited as election personnel declined participating in the election following a reckless statement attributed to a top government official in the state. The official was quoted as saying “let them bring anybody as INEC official from anywhere that wants to be funny, I wish the person must have written his Will before he comes”. Such is just an example of several incendiary statements made by gladiators in the prelude to the elections.

To foster ACCOUNTABILTY, INEC published the list of about 277 lecturers chosen from UNIPORT to serve as returning and collation officers. The People’s Democratic Party objected to 85 out of the list without calling adequate evidence, some of the reasons proffered ranges from previous membership of government board or committee constituted by previous administration and such notations were made against only five names on the list. Virtually all the lecturers recruited as Adhoc staff for the elections became exposed persons trailed around the state and threatened.

#RiversRerun introduces a new narrative in harking to national services, simply put it is serve your country and sign your death warrant. The charade and electoral heist witnessed during the March 19th National and state assembly rerun elections confirm the fears expressed by family members of election officials and other stakeholders. Several reasons can be adduced for this ugly situation. One is the zero sum nature of politics in Nigeria. The winner takes all politics, once you win office you access power and resources associated with it. In this election, it was the same but it was also an ego-flexing venture, where the gladiators had to assert their own masculinity. A direct implication of this is the Rivers rerun became a war between two strong men and not the electorate, in fact rather than exercise their franchise, most electorates were more interested in pursuing safety within the confines of their homes. Under this prevailing circumstance, there is no way INEC as an unbiased umpire could successfully conduct elections in an unsafe and hostile atmosphere. In Rivers, the environment failed the both the umpire and voters.

Secondly, #RiversRerun brings to fore not just the failure of the state to properly secure its citizens especially election officials and materials but systemic impunity in prosecuting electoral offenses in the country. This electoral impunity cut short the life of Samuel Dumebi Okonta, a serving National Youth Service Corps (NYSC) member. Dumebi was gruesomely murdered by gunmen believed to be supporters of one of the parties in Ahoada West Local government of Rivers state. Late Dumebi, a graduate of Political Science from the Ambrose Ali University, Edo state was reported to have been trailed by the gunmen from the INEC local government office where he submitted the election results. The incident that led to Dumebi death is similar to the death of the 11 NYSC members killed in the 2011 post election violence. Late Ukeoma Ikechukwu a NYSC member serving in Bauchi state was also trailed by an angry mob to the police station after he submitted the election results for his polling unit in Giade local government of Bauchi state and murdered in cold blood for refusing to falsify election results. Often times, election officials are intimidated and murdered because of their refusal to compromise the credibility of elections. In every election, desperate politicians deploy tactics and shenanigans to compromise election officials so elections can be rigged in their favor. Party agents and thugs greet any resistance by an election official to corrupt overtures of desperate politicians with vicious intimidation and death threats. This no doubt, presents another compelling need why citizens should think twice before participating as election officials in any election.

Ironically, some instances of intimidation and assault on election officials are brazenly committed in the full glare of security agents who are supposedly deployed to protect election officials and materials. This was apparent in the Kogi, Bayelsa and Rivers elections. During the 2015 governorship elections, a duly accredited journalist observing the elections Ukachi Chukwu was intimidated and brutalized by thugs in Obia Akpor local government in the presence of security officials. Rather than protect this victim, the security agents blamed her for coming to observe the elections in the first place. They enjoined her to leave the location, as her security could not be guaranteed. If security agencies that ought to protect us are overpowered and have given up what should ordinary citizens do if not to resort to faith and pray for heavenly protection?

Late Dumebi could have been a professor of political science, an election commissioner, a diplomat, a politician, a responsible and loving father and husband. But his death strips us of that opportunity to tap into his resourcefulness for national development.

The #RiversRerun is not only a national embarrassment but also a testament that we have a long walk to political freedom. The level of impunity exhibited by the two major contending forces in the state is unacceptable and should be sanctioned by the State. The lawlessness exhibited in the last Rivers and Bayelsa states elections are unprecedented and opening another vista in elections. In several local governments in these states, election personnel were abducted; beaten up/ rough handled and forced to write election results even where voting didn’t take place. Just to take few examples in the rivers rerun, in Degema, the electoral officer was chained like a dog for 13 hours for refusing to declare fake election results. An Assistant Electoral Officer was later drafted and compelled to write results as dictated by the benefitting politician using a wrong declaration form. In Khana and Bonny, elections officials had to scamper for safety after disruption of results collation by assailants believed to working for both the incumbent People’s Democratic Party and the opposition, All Progressive Congress.

As a nation, there is no way we can argue that the force of these lawless thugs are mightier than that of the state. How do we for instance explain the deployment of 6000 police officers and 8 additional mobile police squadron yet the thugs held sway in the Rivers elections. Were these 6000 police officers really deployed or do we just believe non-state actors such as thugs in this instance are more powerful than the state?

Has the state become so powerless that law and order cannot be guaranteed or this is a classic case of complicity on the part of the state? No doubt there’s a political economy around elections. For security agents’ especially top officials, elections are moneymaking ventures where the highest bidder takes the day. It is high time INEC examines the essence of the Inter-Agency Committee on Election Security; if the security of election officials and materials cannot be guaranteed during elections?

It must be mentioned; elections in between the electoral cycle have become ‘cocoa farm’ for corrupt election officials who use the opportunity of elections to amass wealth. This category of officials worry less about the number of times elections are declared inconclusive, after all, inconclusive elections serve their selfish interest. Therefore, they conspire with politicians to create scenarios for elections to be declared inconclusive. The alleged cases of complicity on the part of INEC officials in the #RiverRerun should be thoroughly investigated and defaulters should be openly prosecuted. This will potentially boost the confidence of stakeholders in the neutrality of the electoral commission. While acknowledging the burden of prosecuting electoral offenses placed on INEC is onerous, the commission must make efforts at prosecuting offenders to serve as deterrence to election offenders.

It is not enough for President Buhari to admit he failed in curtailing the violence experienced in the Kogi, Bayelsa and Rivers elections as expressed during his address to the All Progressive Congress National Executive Council meeting on March 24th 2016 in Abuja. The president cannot remain aloof while unscrupulous mischief-makers terrorize the state or a section of it and kill citizens like chickens in an abattoir. This is a Republic bound by laws and Rivers remains part of this Republic, therefore the President must rise up to the occasion as Commander in Chief to immediately caution the gladiators in Rivers state to sheathe their swords and allow peace to reign while at the same ensure the prosecution anybody found culpable in the blood letting of the last weeks.

There can be no democracy without people. In the same vein, there can be no elections without election officials. If this game of politics has to be played, there must be an unbiased umpire, whose security must be guaranteed. INEC should resist any pressure to return to Rivers for any election if the security of its staff and election materials cannot be guaranteed.

Dying in the course of managing elections cannot be the new and trendy way of dying for Nigeria’s democracy.

Samson Itodo is an election enthusiast and he works with the Youth Initiative for Advocacy, Growth & Advancement (YIAGA). He tweets @DSamsonItodo.

Elnathan John: How To Travel Through Africa With A Nigerian Passport