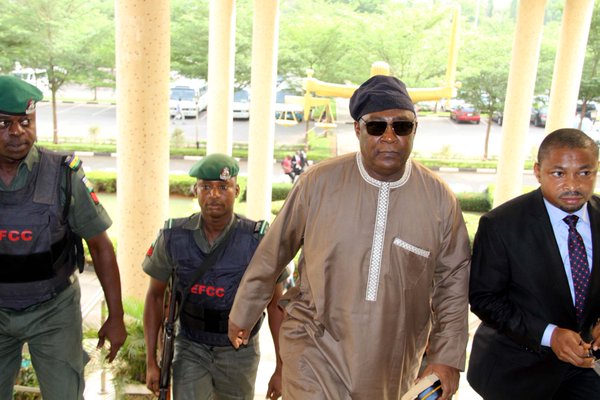 The Federal High Court in Abuja has granted bail to the ?former Chief of Defence Staff, Air Marshal Alex Badeh (retd),? to the tune of N2billion.

In his ruling, Justice Okon Abang said he was minded to ?exercise his discretion in favour of the erstwhile military chief who has been in custody of the Economic and Financial Crimes Commission, EFCC, since February 8. ??Placing reliance on section 36(5) of the 1999 Constitution, as amended, which presumes an accused person innocent, Justice Abang, granted Badeh bail to the tune of N2bn with two sureties who are to deposit N1bn each.

The court ordered that the sureties must not only be resident in Abuja?, but must own landed properties in the Federal Capital Territory with a valid Certificate of Occupancy. ? It stressed that the Chief Registrar of the court must authenticate the ownership and value of the properties.

Justice Abang directed that upon being put on notice by the defendant, the EFCC should within 24 hours, Independently ascertain the residence of the sureties, as well as their ownership and value of the landed properties.

Besides, the sureties are to provide their three years tax clearance certificate, deposit the original title documents of the properties, and also depose to an affidavit of means.

The sureties according to the court must also submit their two recent passport photographs, as well as produce a convincing evidence that they have the means to pay the total sum contained in the charge, should the defendant jump bail.

Moreover, Justice Abang ordered Badeh to surrender his international passports to the Chief Registrar of the court.?

Badeh is facing trial over allegation that he diverted about N3.9billion from accounts of the Nigerian Air Force within 2013.

After Meeting With Government, Oil Workers Call Off Strike