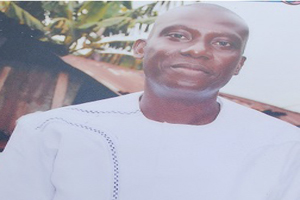 Police in Rivers State are still trying to solve the puzzle of masked gunmen who killed the ward chairman of the All Progressives Congress in Omoku, headquarters of Ogab/Egbema/Ndoni council.

On Saturday night, with elections just two weeks away, masked gunmen first shot dead Franklin Obi, and then beheaded him.

Still bloodthirsty, they killed his wife and 18-year-old son, Bestman.

The gunmen took away the head of Franklin and then disappeared, leaving a riddle behind. Who were they?

The killings took place at Omoku, headquarters of Ogba/Egbema/Ndoni Local Government, hometown of the state Chairman of the Peoples Democratic Party (PDP), Chief Felix Obuah.
In Omoku last month, 25 persons were killed, with many of them beheaded.

Until his murder at his home on Rutachi Street in Omoku, Obi was the APC’s chairman of Ward 4, the same ward with Obuah.

Police Commissioner Musa Kimo, during a visit to the family, described the incident as sad, while the state APC, through its Publicity Secretary, Chris Finebone, condemned the barbaric act.

A 16-year-old daughter of the deceased, Victory, who was in a room with his elder brother, Bestman, saw her dad beheaded through an opening.

Victory said after killing his parents, the gunmen came into the room and ordered them to leave the room. But she said the killers, annoyed by Bestman’s sluggishness, shot him dead at close range.

APC said: “The killing of our Franklin Obi on Saturday night was shocking, to say the least. It goes to support what we know that the PDP members have been responsible for all the killings in Ogba/Egbema/Ndoni Local Government.

“Make your deductions: the late Franklin Obi was the APC’s Ward 4 chairman. He managed and moderated the Ogba/Egbema/Ndoni APC’s meeting last Thursday in Omoku and by Saturday he was killed and beheaded, with the wife and son also killed.”