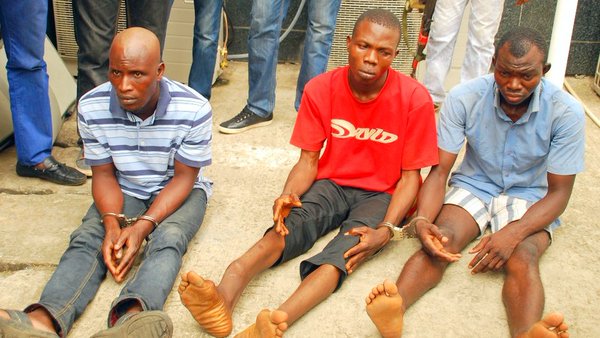 Arigidi, 37, from Ondo State, said they were 12 in number who planned the operation, but noted that one of them, Lamiameni, was the one who brought the deal, which was planned at Majidun area of Lagos.

“We are 12 in number that carried out the operation. We planned the operation in Majidun and after that, we went to Maya bridge to enter Canoe and went to the school around 8pm. After we gained entrance into the school, we took away three girls and we took them to our hideout,” he said.
He added that along the line, he had misunderstanding with other members of the gang, as he insisted that the girls should be returned to where they were kidnapped due to the tight security system in Lagos State.

“But along the line, we had disagreement between ourselves and I was actually the one that started it. I told other members of the gang that what we have done is not good and that I don’t like it. I know that security in Lagos State is now tight and I was telling others that there was no way we would get away with this kind of job considering the level of security in the state.

”When I told them that we should end the assignment, other members of the gang threatened to kill me and then I took Canoe to run away. Three days after I ran away, operatives of the Special Anti-Robbery Squad (SARS) then arrested me somewhere in Majidun and that was how I told them how we planned the attack,” he narrated.

Arigidi added that “One thing I will like to say is that if not for the fact that I was arrested, they would not have seen the girls because I was the one who revealed everything to the police.”

The prime suspect, who said he is a traditional bone setter, said the leader of the gang is called Felix who hails from Edo State, saying that he had not been arrested as he had escaped into the forest with other members of the gang.

He stated that three local guns and four rifles were used in the operation, which he said were brought in by Felix.