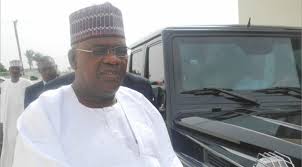 Danjuma Goje, an All Progressives Congress (APC) senator from Gombe state, says some programmes in the 2016 budget proposal are not feasible.

Goje, who is the chairman of the senate committee on appropriation, said this in Abuja on Thursday at an interactive session with some ministries and the Central Bank of Nigeria (CBN). He said there were no clear implementation strategies on the N500 billion intervention fund for poor Nigerians, free feeding for school pupils, among others. The senator said there were areas where the executive could not give satisfactory explanations.

“There is no detailed, clear cut structure laid down for implementation of this project because what we have in this budget is N300 billion recurrent and N200 billion capital,” he said.

“We had to push hard yesterday to get some details which were not convincing. “For instance, the explanation we got was that N5, 000 would be given to one million Nigerians.

“Who would choose the one million people, what structures you have in place to make sure that you choose the right people? “You want to give money to about one million market women or there about and in my place we do not have many market women.

“How would they choose the market women that would represent all interests?

“We have not got clear explanations to these numerous issues surrounding the implementation of this programme. “Even the afternoon school feeding contained in the budget is not feasible because some students study under non-conducive environment. Will feeding them enhance their learning.”

Goje said while the national assembly was in support of the programme, implementing it in 2016 might not be feasible. He suggested that the money be added to the budgetary allocation for sectors like power, transport and health, while those responsible would map out better strategy against 2017.

“We are all happy with the programme and I am a party man to the core but what needs to be done, needs to be done very well,” he said. “I think there is a need to do greater work on implementation; otherwise this money will go down the drain.

“We would rather use this money to solve our problem; use this year to do very sound ground work for implementation so that the programme can take off next year.”

PDP Chief, Uche Secondus Says His EFCC Trial Is A Case of Witch-hunt And Political Persecution