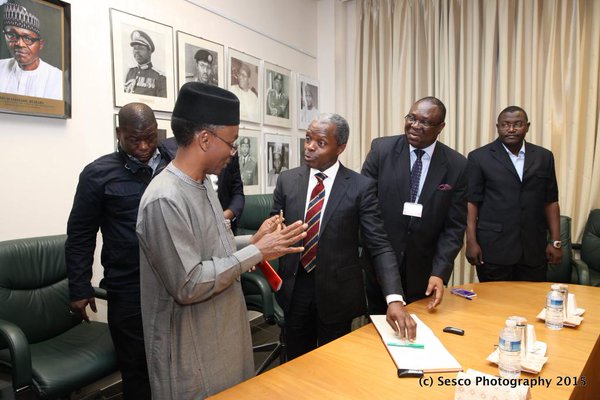 Governor Nasir El-Rufai,of Kaduna State yesterday said he has created over 125,000 direct jobs in the state within the past nine months.
El-Rufai stated this during his sixth town hall meeting with the people in Saminaka, Lere Local Government Area of the state.

He said the state school feeding programme which he introduced created at least 85,000 jobs for food vendors, their staff and supervisors.

“The job impact of ongoing interventions is over 125,000 direct jobs in Kaduna State within less than one year of the APC being in office. The estimates of these include: School feeding programme: at least 85,000 jobs, including the vendors, their staff and supervisors. School uniforms:11,100 jobs, rehabilitation of schools:7,542 jobs, construction of toilets:6,285 jobs, solar boreholes:5,028 jobs, KASTELEA:2,550 jobs,waste collection:6,700 jobs, Science and Maths teachers: 2,300 jobs,” he said.
The governor added that the state government is in talks with Dangote and Olam for integrated tomato agro-industrial projects around Galma Dam.

He said Olam has also decided to build the largest poultry and feed-mill facility in Sub- Saharan Africa in the state.

El-Rufai, who was accompanied by the senator representing Kaduna-North senatorial district, Alhaji Suleiman Hunkuyi and other top government officials on a police helicopter for aerial view of the state, said operations against cattle-rustlers, kidnappers and other criminal gangs are continuing in the affected areas.

“Our security agencies have better vehicles and improved communication infrastructure to respond to threats. Our internal security team, Operation Yaki, has been active in raiding black spots and preventing crimes, while responding more rapidly to robberies and other threats to lives and property.

While thanking security agencies for their efforts and service to our state, we ask our religious and community leaders to continue to preach peace and unity, promote tolerance, discourage hate speech and renew calls for increased vigilance in all our communities, “he said.

He said Stallion Group will build a 10,000-hectare rice farm and mill in Kaduna to reduce the dependence on imported rice.

“Other rice farm and mill projects are being implemented by many firms to utilize our zero-interest loans around the CBN rice anchor lending programme,” he added.