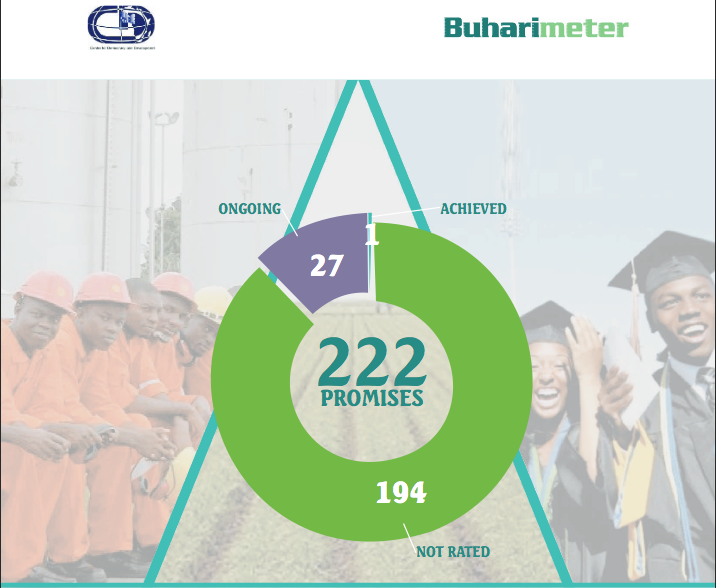 The Centre for Democracy and Development (CDD) has released its fourth Buharimeter Report. Buharimeter is an innovative governance tracking tool, designed to monitor the level of progress in the fulfilment of the 222tracked electoral promises made by President Muhammadu Buhari (PMB) to Nigerians in the build up to the 2015 Presidential election. The fourth report provides insights on key sectors of the economy and the Nigerian polity. The report makes informed and evidence based judgment calls on the President’s scorecard in critical sectors, such as security, the economy, fighting corruption, oil and gas, agriculture, and social and environmental sectors.

On security, which is one of the main signature issues on which PMB campaigned, the report notes that the Nigerian military has made progress in curtailing the insurgency in the North East. However,an estimated 1,949 people have been killed by Boko Haram between June 1- 31st December, 2015 and hundreds of thousands internally displaced within same period[2]. The report notes that interventionist strategies being implemented to curtain the insurgency in the North East would only be effective if the fundamental causative factors fuelling extremism are addressed. Still on security, the fourth Buharimeter Report equally identified other forms of insecurity challenging the authority of the Nigerian State, as rural banditry, kidnapping,piracy, armed robbery,etc which requiresa robust, direct and strategic response from the administration of PMB.

On the economy, the fourth Buharimeter Report, while noting that the government introduced several policies to improve the economy, it states the absence of fiscal policies to complement the monetary policies reeled out so far. Similarly, the report states: “The deplorable state of infrastructure in the country is also disturbing given its relevance to boosting investment, industrial growth and the economy. The unreliable power supply has been a major challenge for the development of the economy.” The report calls on the PMB government to formulate policies to address the problems of the power and transportation sectors and provide adequate social amenities.”

PMB got some positive reviews for the vigour demonstrated in the war against corruption. However, there are concerns that some campaign promises on waging an effective war against corruption have not been fulfilled. Top on the list is the fact that the process for enactment of a Whistle Blower Act, and the granting of prosecutorial autonomy to the anti-graft agencies, is yet to get underway.

Under the section “Metering the Interventions, “the fourth report concludes that PMB has only achieved one out of the 222 tracked promises, which constitutes 0.5 percent of the promises. The report further notes: “Only 27 (12.2percent approximately) of the tracked promises are ongoing, which suggests that the government is taking action. In view of this, 194 electoral promises are still “Not Rated” perhaps owing to lack of practical steps taken to achieve them. Unfortunately, these unrated promises constitute 87.3percent of the tracked promises,” the report concluded.

The report calls for the strict adherence to the rule of law in the prosecution of the anti-corruption efforts, inclusion of women, youth and other vulnerable groups in the governance processes and the protectionof civilians in armed conflicts.