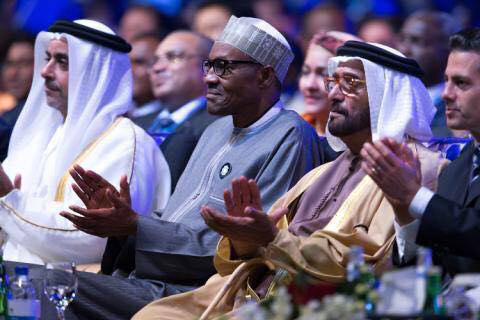 The greatest news coming out of President Buhari’s recent trip to the United Arab Emirates is the fact that he signed some repatriation and rendition agreements that will certainly make life a tad more uncomfortable for hundreds of Nigerian goats who had shored up their yams – stolen from Nigeria – in Dubai.

We’ve already heard a lot of anticipatory bleating of resentment from many of the said goats and their degenerate, corruption-defending supporters. That is a good development. I have said it once and it bears repeating: President Buhari must not be deterred from the anti-corruption war but must ensure that fairness and due process are not compromised.

However, visiting Dubai is always a risky philosophical proposition for any Nigerian leader. If you emanate from a political elite that has spent all of the five decades of the existence of your country wasting hopes, dreams, and aspirations, and making ash and rottenness of what ought to be the black race’s most advanced and most developed country, Dubai is a very tough place to visit.

Dubai is a very tough mirror to look into, especially for anyone who has ever been part of Nigeria’s leadership scenario since independence. What the mirror that is Dubai flings in your face as a Nigerian leader is the summation of fifty years of failure by the political elite to which you belong.

What Dubai throws at you in the mirror is the road Nigeria could have taken with her oil. What Dubai rubs on your face is what Nigeria could have been – the one destination where Americans, Europeans, Chinese, and Japanese flock to do obeisance and bow before superior vision and imagination in the construction of modernity.

More importantly, if you are a Nigerian leader visiting Dubai, what that mirror throws in your face is that every building you see, every road you see, every gravity-defying flight of human genius and creativity you see in Dubai’s infrastructure, every mall you see, all that gloss, all that hyper-development, all that hyper-modernity you see in Dubai, also exists in Nigeria. It exists in the potbellies of the Nigerian elite. They have spent the last fifty years gorging and growing their own Dubai of the belly.

Whenever you see the potbellies of Nigerian officials, Nigeria’s Burj Khalifa resides in there.

Whenever you see the distended bellies of Nigerian officials, Nigeria’s Burj Al Arab resides in there.

If you are an ordinary Nigerian in the habit of going to Dubai to see all the architectural and infrastructural wonders yonder, save yourself a trip, stay at home, and contemplate the belly of your state Governor, Federal Minister, Federal Rep or Senator. That is your own Dubai right there.

If you cannot stand the ugly physique of many in the Nigerian political elite, with their distended bellies housing your Dubai, don’t worry, just take a look at any Federal budget in recent memory.

In the history of shoddy and incompetent budget submissions, it is doubtful that we have ever had it so bad. But in typical Nigerian fashion, both supporters and opponents of President Buhari are majoring in minors with regard to their engagement of the budget fiasco.

The logic in these pedestrian arguments seems to be that we would be fine, we would have won a significant victory for Nigeria as soon as President Buhari makes his own feeding and maintenance budget lower than Jonathan’s; as soon as he cuts down on the number of needless luxurious cars. Just make sure that every needless spending in the budget is not as outrageous as Jonathan’s and we are fine. I have shaken my head in sadness as I read variations on this logic all over social media from supposedly educated Nigerians.

The real tragedy of the Buhari budget is the absence of a fundamental shift in Nigeria’s budget philosophy. A budget is more than figures and how you plan to source and spend those figures. A budget is a philosophy, a fundamental reflection of who you are and what your values and priorities are. In her entire postcolonial history, Nigeria’s budgets have painted the picture of an unserious, irresponsible country wedded to the wanton creation of a Dubai of the belly.

It is this overarching framework and philosophy that President Buhari had the historic mission to change with his very first budget and he has tragically failed to rise up to the occasion.

What he would also have seen in the United Arab Emirates is a country that has pretty much spent the last twenty years budgeting for the first one hundred years of her post-oil future. That is what a budget philosophy is about. Nigerians do not understand this fact, hence they are insisting that president Buhari should adjust figures in order to appear less ostentatious than President Jonathan.

Spending less than Jonathan in a budget whose underlying philosophy is still to service the Dubai in the bellies of the Nigerian elite will not help Nigeria in anyway.

It is Nigeria’s entire budget philosophy of laziness and elite consumption that must change.

2017 is another year for Buhari to find the courage to fundamentally shift Nigeria’s budget philosophy.

The Online Warriors By Reuben Abati

Obasanjo, Dino Melaye, and the Impossibility of Nigeria’s Progress By Pius Adesanmi