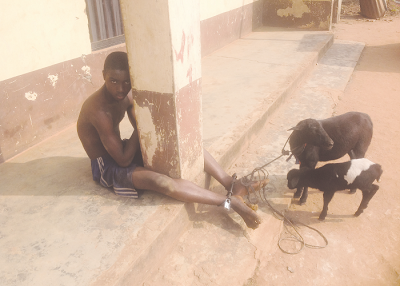 15 year old Miracle Oluebube Nweke, a native of Eziagu, Enugu state, was caught on Monday, Jan 18 having sex with a Sheep. A friend who caught him in the act raised an alarm leading to his arrest by a vigilante group.

Miracle said he knew that it was not normal but that he could not help himself and that anytime he had the urge, a strange voice would lead him to where he would get a sheep which he would loose and drag to an uncompleted building to have sex with it.

According to Authorityngr.com reports, he explained saying, “It gives me great pleasure whenever I have sex with a sheep, I have never had sex with human being in my life except sheep, I haven’t tried any other animal to know the difference, my experience with sheep is sweet”.

“Whenever I get any sheep of my choice, I untie it from the spot where the owner has left it and take the sheep to a secluded uncompleted building and have sex with it”.

“I don’t do anything else with the sheep than that. I nor­mally make sure that no one is around watching while doing it because I know that the own­ers of the sheep may not like it.

He however blamed evil spirit for being responsible for his sexual depravity.

“There is a spirit that normally tells me to go and look for sheep and whenever I hear the com­manding voice of the spirit, it becomes irresistible for me to take away my eyes from sheep. I will be so restless and confused until after I have car­ried out the instruction of the unseen spirit.