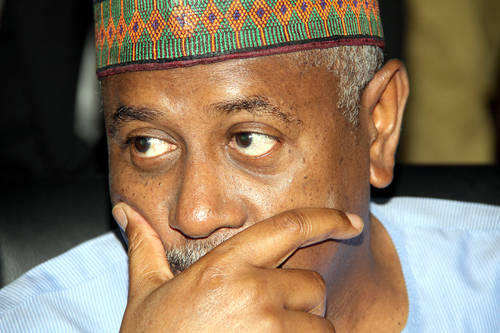 Following his continued detention despite meeting his bail conditions, former National Security Adviser (NSA), Sambo Dasuki, has filed a suit against the Federal Government before the ECOWAS Court in Abuja and is demanding payment of N500 million damages for alleged rights infringement.

In the suit filed by his lawyer, Robert Emukpoeruo, Dasuki asked the court to declare his continued detention as “unlawful, arbitrary and an egregious violation” of his human rights. Dasuki in the suit also asked the court to declare that the alleged invasion of his Abuja and Sokoto residences on July 16 and 17, 2015 and the “forceful and unlawful seizure” of his properties, “without any lawful order or warrant” constituted a gross violation of his fundamental rights and offended the country’s treaty obligations as a signatory to the listed legal instruments.

No date has been set for hearing of the suit. In a related development, Justice Adeniyi Ademola of the Federal High Court, Abuja yesterday ordered the Federal government to produce him in court on February 16th. Dasuki’s lawyer, Joseph Daudu (SAN), told the court that his client was abducted by security agents six weeks ago to an unknown destination.

“I am worried that the accused is not here. I do not want to set a bad precedent. Except the court gives express order for the defendant not to be in court, the accused must be brought to court from wherever he is. The accused must be here because I am not sure if what I am doing right now in the absence of the accused is not an illegality. Government and whoever is concerned must endeavour to do the necessary thing. The accused having been formally charged in court, must be produced in court for trial on the appointed days in compliance with the provisions of the law,”

Dasuki’s trial has been fixed for February 16 and 17 before Justice Ademola.

Metuh Arraigned For Destruction Of Evidence In His Criminal Case, Back To Prison