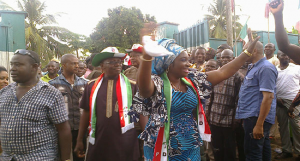 The All Progressives Congress (APC) screening committee on Monday, disqualified Senator Uche Ekwunife from contesting in the forthcoming Anambra Central Senatorial District rerun elections under the umbrella of the party.

At the venue of the election in Awka, Anambra State capital, hundreds of delegates converged to participate in the exercise ahead of the February election for Anambra Central Senatorial Seat.

But no party electoral official was in sight to confirm the conduct of the exercise before the protest broke out from the camps of Mrs Ekwunife and her opponent, Mrs Sharon Ikeazor.

While the delegates waited at the former Tourist Garden Hotel, along the Enugu-Onitsha expressway, news broke that one of the contenders in the primary had been disqualified.

Mrs Ekwunife had defected to APC on the wake of the Peoples Democratic Party’s refusal to conduct its primary election in agitation over the arrest and detention of the National Publicity Secretary of the PDP, Mr Olisa Metuh.

She was alleged to have been disqualified by the party during screening for having not been a member of the party for a required period of time.

The story received spontaneous reaction of rejection. Read complete signed copies of the disqualification document by committee members below..