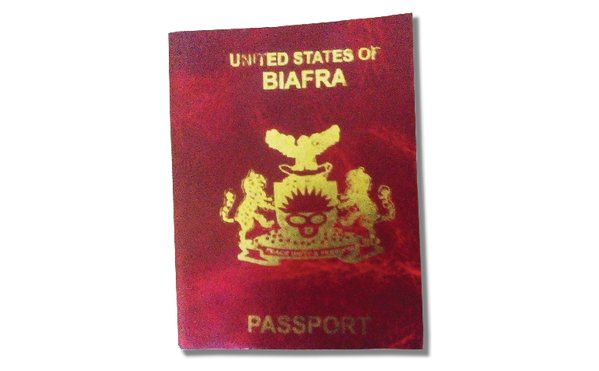 What were we thinking? That is the multi-million Naira question on the minds of thousands of Igbo men and women who obtained the documents sold by the now deposed leader of the Movement for the Sovereign State of Biafra (MASSOB), Chief Ralph Uwazuruike, as Biafran International Passport.

According to TodaysNG, It is alleged that MASSOB generated over N500 million from the sale of the passport alone. But incidentally, it was a passport to nowhere, as none of those who obtained it could travel with it.

Findings indicate disenchantment and disappointment among former loyalists of Uwazuruike who bought the Biafran passport.

A holder of the passport, Ngwoke Ibem Ngwoke, who has since dumped Uwazuruike, said that whatever led people to rush to buy the passport can best be described as ‘mass deception’, skillfully deployed by an unscrupulous spin doctor.

He said: “I paid N10,000 to buy the passport. At the time, I was the Administrative Secretary. Members and interested persons paid the sum of N10,000 into a designated bank account at First Bank, then presented the teller to me.

“Based on the assurances given to us by Uwazuruike, which we didn’t know were all lies and make-believe, we even urged people to buy and use the passport for ease of travel.

“One of our aged members bought Uwazuruike’s story like many of us did at the time and convinced his daughter who was about travelling to Europe to use the passport. The lady was arrested in Lagos and was detained for nearly two years. Uwazuruike did nothing to free her,” Ibem said.

He maintained that today, four of Uwazuruike’s children and wife are overseas and none of them travelled with the Biafran passport.

Ngwoke stated that the issue of Biafran International Passport was not the only initiative of Uwazuruike to allegedly exploit the largely impoverished membership of MASSOB.

He recalled the launching of a MASSOB plate number. He said: “Speaking about the area I operated and know very well, many people in the Nsukka area of Enugu State were clamped down in detention for several months for buying and using the MASSOB number plate as recommended by Chief Ralph Uwazuruike. And there was never a compensation or refund for damages caused the buyers.”

Another respondent, who wanted to be addressed simply as ‘Chief’, explained that the Biafran International Passport was apparently printed in Lagos and brought down to the South-East by one Benjamin Onuegbu (a.k.a Papa) who also prints the Biafran income tax receipt and coordinates Western operations of the group at the time.

He said, “I bought the Biafran International Passport around 2012. I paid to Anyasoh who was mandated by Chief Uwazuruike to handle the passport issuance. We were strongly assured that no government could question or reject the Biafran International Passport. Our then leader told us that most African nations like Ghana have endorsed the passport, stressing that it was safe to travel with it to any part of the world. We didn’t have any reason to doubt him as we believed he must have negotiated and received some assurances from all the relevant agencies and embassies.”
Chief, however, noted that his biggest regret in the course of the passport saga came when he recommended the passport to one of his friends, who was about travelling to Canada, but was facing some minor bureaucratic delays.

“Based on what Uwazuruike told us, I literally guaranteed my friend ease of passage and a hassle-free journey until he accepted to travel with the Biafran International Passport. Shockingly, he was arrested and detained for three months in a prison in Lagos. Today, I have become his enemy and I don’t blame him. I blame the leader that lied to us.”

Chief maintained that he paid for the passport at Okwe in Uwazuruike’s country home.

“When the sales of the passport started, we were paying cash, but later a bank account was opened and run by Anyasoh. But the withdrawal book was kept by Uwazuruike who superintended over the account,” he said.

The issuance of Biafran international passport by the then leadership of MASSOB under Uwazuruike has, for some time now, remained a talking point among public commentators.

“Under Uwazuruike, each member also paid N10,000 for Biafra International Passport to Ralph Uwazuruike. Since 1999 to 2014, members have contributed about N300 million to Uwazuruike’s account while about N200 million was also paid into a Zenith Bank account of Confidence Uwazuruike, a son of the former leader,” Madu said.

According to the group, Uwazuruike bought houses in many locations in Owerri, “including a street he bought and named after himself in New Owerri, which is estimated to contain about 28 plots. MASSOB has contributed and generated nearly N4 billion in the last 16 years under Uwazurike.”

Reading the communiqué at the MASSOB National Headquarters, Okwe in Onuimo council area of Imo State, the group maintained that Uwazuruike’s introduction of the Biafra International Passport without the existence of a sovereign state of Biafra was a grossly dubious and fraudulent means of amassing over N100 million to himself.

“Many, who attempted to use the passport landed in trouble. Today, the passport is useless to thousands of its holders as not even Uwazuruike uses it. This was a premeditated scam,” the communiqué read.

Madu said that the Biafran passport is a scam.

His words: “It’s one of the numerous ways Uwazuruike uses to defraud people in the name of Biafra. Others are Biafra income tax and Biafra vehicle/motorcycle plate number.

“With the level of fraud, corruption and criminality Uwazuruike exhibited, he can no longer be trusted or taken serious in Biafraland again. Even his followers are aware that he’s no longer a factor in Igboland,” Madu said.

Reacting, the spokesman for BIM/MASSOB, Sunday Okoroafor, said that the Biafran International Passport had always been valid and would continue to remain valid.

According Okoroafor, “I know no fewer than three persons in America who travelled and live in America with Biafran passport. They live in Virginia and Baltimore and their residency is valid.

“As a matter of fact, the Biafran International Passport has been in existence since the days of Ikemba Chukwuemeka Odumegwu Ojukwu. Through the civil war, we had the Biafran passport, we only renewed its existence,” Okoroafor said.

He noted that the claim that there was no nation behind the passport is false. He informed that the issue of Biafran referendum has been raised and settled in the British parliament.

“Presently, we are in the process of conducting elections into public offices in the Biafran nation. Biafra is valid and our passport is valid,” he said.

SERAP Wants EFCC, ICPC To Prosecute Executives Of CBN, Other Banks Over Their Involvement In Arms Procurement Scandal