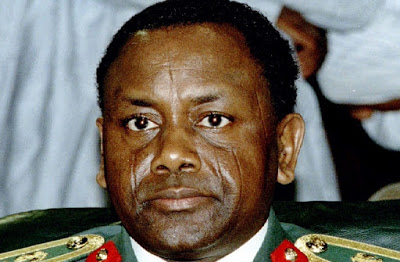 Socio-Economic Rights and Accountability Project (SERAP) has “received several documents from the World Bank totalling over 700 pages on information on the spending of recovered assets stolen by the late General Abacha, with some of the documents suggesting that Abacha loot was spent on roads, electricity, education, health and water.

This information was disclosed by SERAP executive director Adetokunbo Mumuni in a statement dated 29 November 2015.

We also received a letter dated 24 November 2015 from Mr Rachid Benmessaoud, Director of the World Bank in Africa.”

“In total, SERAP has received over 700 pages of documents, which we are now closely studying and scrutinising with a view to discovering whether the documents contain details that Nigerians would like to see and whether the information correspond to the facts on the ground. After this analysis, we will respond to the Bank and consider our options, including filing an appeal before the Bank’s Access to Information Appeals Board and taking other appropriate legal actions nationally and internationally to discover what exactly happened to Abacha recovered loot,” the organisation said.

The organisation said that “In the meantime our preliminary review of some of the documents and the letter from Mr Rachid Benmessaoud have revealed certain facts which raise more questions about what exactly happened to Abacha loot: First, that Mrs Ngozi Okonjo-Iweala as Minister of Finance in a letter dated 9 January 2005 explained to the Bank that around $500m (N65bn) of Abacha loot received from Switzerland was programmed into and spent in the 2004 and 2005 budgets on roads, electricity, education, water and health across all 6 geo-political zones of Nigeria.”

“Second, Mrs Iweala explained to the Bank that N18.60bn was spent on roads; N10.83bn spent on health; N7bn spent on education; N6.20bn spent on water; and N21.70bn spent on electricity. She also said that part of the funds were spent on new and ongoing investment projects. Mrs Iweala said that relevant federal ministries have the full details on the spending of repatriated Abacha loot. The Bank noted that there was no funds monitoring and tracking mechanism in place to trace the spending of Abacha loot,” the organisation also disclosed.

“Third, Mr Rachid Benmessaoud confirmed that the World Bank played a monitoring role in a return of assets by Switzerland but that the Bank is not currently involved in the monitoring of spending of Abacha loot that have been returned to Nigeria in recent years. He said that the Bank would be prepared to set up a mechanism to monitor the use of Abacha loot if the Nigerian government request the Bank’s assistance in this respect.”

“Although Mrs Okonjo-Iweala said that Abacha loot was spent in the 2004 and 2005 budgets on roads, electricity, education, water and health across all 6 geo-political zones of Nigeria, there is no evidence of such projects as millions of Nigerians continue to travel on dead roads, while they continue to lack access to adequate electricity supply, water, health and quality education.Therefore, President Buhari can no longer continue to remain silent on this issue of public interest if Nigerians are to continue to trust him in his fight against corruption,” the organisation also said.

It would be recalled that in a letter dated 15 October 2015 and signed by Ann May of the Access to Information Team, the Bank said that “In response to your request under AI3982, we would like to inform you that we are still considering your request and need additional time to provide you with a more comprehensive response.”

The letter reads in part “In most cases, we will be able to respond within twenty (20) working days from receipt of a request for information. However, we may need additional time in special circumstances, for example, if the request is complex or voluminous or if it requires further review by or consultation with internal World Bank units, external parties, the Access to Information Committee, or the World Bank’s Board of Executive Directors.”

The group also asked Mr Yong Kim to “disclose information about the Bank’s role in the implementation of any projects funded by the recovered assets and any other on-going repatriation initiatives on Nigeria with which the Bank is engaged.”

The request was “pursuant to the World Bank’s Access to Information Policy (The Policy), approved by the Board on June 30 205. SERAP notes that one of the Policy’s guiding principles is to maximize access to information. There is also clear public interest in Nigerians knowing about the Bank’s supervisory role and specifically its involvement in the implementation of projects on which repatriated funds were spent.”

Just In: Lagos Government To Arraign TB Joshua And 2 Engineers Over Building Collapse That Killed 116