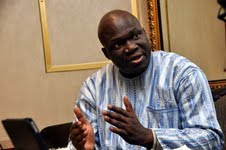 “My brother, let’s just say I slept at a fuel station, looking for fuel.”

“For which of the women in your life, because I hear these days, to please a woman in Nigeria, you must be ready to supply the three major things lacking in the land: money, fuel, and happiness.”

“Leave that matter, please. My condolences on the death of your man, Governor Abubakar Audu”

“We thank God for his life. He played his part.”

““To be so close to breasting the tape and then fall.”

“I know. I know. May be if he had not insisted on running again for the office of Governor in Kogi state, he would still be alive today.”

“The man drove himself too hard, publicly and privately. He ran for every Gubernatorial election in Kogi state since 1991. There must be something special in being Governor for him.”

“Don’t speak ill of the dead, I beg you. Simple etiquette.”

“I don’t know nothing”

“Then the man went and married a young, 23-year old. If the election had been concluded and the man had won, the First Lady of Kogi state would have been a 23-year old lady! Those who seek public office should always weigh their lifestyle and their health against their ambition, but politicians act as if they are superhuman.”

“Excuse me! Respect the dead, please. Abubakar Audu was a democrat extraordinary, a courageous politician, a visionary, selfless, man of the people, and his party’s popular choice.”

“What kind of talk is that? Death is final. It is the cessation of all things, a necessary end.”

“Nothing has ended with Abubakar Audu’s death oh. Did you not see the desperate efforts made to get some Prophets to resurrect him? And some people actually believed that he could be the Lazarus of our time! They started jubilating.”

“That is concrete proof of his popularity. But I was shocked seeing Nigerians will believe anything, and being so superstitious. Even the grave diggers stopped digging, waiting for the prophets to perform a miracle.”

“I hear there was a meeting of the Independent National Electoral Commission (INEC) on the Kogi election but the moment the prophets waded in, even INEC suspended its meeting and did not reconvene until the prophets failed.”

“When the Prophets didn’t deliver, people got angry. They could have lynched those Prophets”

“Well, at least, some people will now know that the prophets are not always right in the age of biology and science. Who could have been behind such a hare-brained scheme?”

“The man’s in-laws, for example.
“Oh, come on”
“Or persons who may have been promised appointments and contracts. Or it could be persons who invested in his candidacy. Elections in Nigeria are business investments. The investors must have thought of a last minute strategy to reverse the situation. Simple economics. ”

“You and your theories. The same people will do business with whoever eventually wins the election, anyway.”

“There is also the inconclusive matter of the 23-year old wife. When the death was announced, many commentators on social media were more concerned about the young widow. Comments about how she will cope, what she would do next. One guy asked for her phone numbers.”

“Another fellow actually said he was ready to inherit all of Audu’s assets and liabilities in that regard.”

“Besides, Audu’s death has turned everybody into a Constitutional expert. What happens if a candidate dies in the course of an inconclusive election? Who becomes the new candidate?”

“Simple. The APC will field another candidate, appeal to whoever is aggrieved within the party to step down until an appropriate candidate who definitely must be Igala, is identified. I don’t see the APC fielding any candidate who will automatically make them lose the election.”

“You think the APC candidate must still be Igala? But nothing is ever that straightforward in Nigerian politics.”

“Of course, otherwise, it will be a walk-over for Governor Idris Wada. The Igalas have the numbers. Politics is a game of numbers. The stakes are high. I foresee many court cases”

“Are you out of your mind? Why are you so obsessed with this lady?”

“Or may be his son. Does he have any son who is qualified? Let them make it a family affair. If he had supported his son as a candidate…But people just don’t know when to quit and hand over to the next generation.”

“With a 23-year old wife, he was definitely committed to the next generation.”

“Some people are of the view that his running mate should just run with the mandate, but I don’t think the circumstances favour him. He is from a minority group in Kogi state. He is a Christian, and the party may not back him.”

“Yeah, he must be troubled. What if he and Audu had won. And they had been sworn in. But now, there are no guarantees.”

“God’s will is supreme. That is one lesson we all must learn from all this. Remember Abacha? When it was time, God intervened. We are all pencils in God’s hands. You can amass all the wealth in the world, marry all the young women, misapply the people’s money, get so close to Cannan, but you can then fall sick and die. In life, things happen and all you have left is six feet, rich or poor, six feet.”

“Didn’t you read that story about 50-year old Grace Mugabe, First Lady of Zimbabwe, buying her Robert, a special wheelchair?”

“The way you pronounced Robert, you make it sound like Robot”

“Isn’t that what the 91-year old President of Zimbabwe has become, a Robot. Grace Mugabe’s Robot”

“Sad. In his days, Robert Mugabe, multiple degrees holder, was a shining star. And now, his wife is pushing him around”

“She actually has a PhD, awarded in two months, without examination or dissertation, by her Robert in his capacity as Chancellor of the University of Zimbabwe!”

“Mugabe! A Pan-Africanist, who stood up to the British and neo-colonial imperialism; today, he is falling down at public functions, he reads the wrong speech in parliament, he is old and tired, and yet he won’t quit.”

“He should. Zimbabwe already has the oldest President in the world, and he has been in power since 1980- 35 years!”
“With a wife like “Dis Grace” Mugabe, he won’t. She says she is ready to push the wheelchair herself, just in case anybody is in any doubt.”
“I won’t put anything past that woman. Didn’t she once proclaim that any woman who wears mini-skirt and gets raped should not complain? Is that not the same woman who punched a journalist in the face during a foreign visit?”

“Mugabe has stayed too long and has allowed a woman to destroy his legacy. He is so smitten with “Dis-Grace”, he allegedly fired his Chief of Defence Staff last year for staring at her derriere!”

“But the woman get am oh. The thing dey; very seriously. And you know in that part of Africa, the women don’t need to buy it and enhance it like Kim Kardashian, the thing just dey and you can lose your head.”

“I think someday in Africa, we’d have to start voting for these First Ladies too. Voters should be given the right to choose the President’s wife, or at least they should be screened by parliament. In Africa, the wives wield so much influence.”

“They do in other places too. It is the man that matters.”

“When Mugabe sits in that wheelchair, Zimbabwe is finished!”

“For democracy to work, we need to worry about the leadership recruitment process in Africa. How do we free democracy from a debilitating sense and culture of entitlement. How do we get persons who are still up to it, and who will not aspire to rule till they are on wheelchair or life-long medication.”

““All men who play God and who aspire to be God, let them be reminded, it is just six feet. In Cameroon, Paul Biya has been sitting tight for 33 years, in Congo, Nguesso has been in power for 36 years, in Equitorial Guinea, Mbasogo is almost a god in human form. And you have dos Santos in Angola (36 years) Bashir in Sudan (22 years) Museveni in Uganda (29 years), Idris Deby in Chad (25 years) and Jammeh in Gambia (21 years).”

“It is also a lesson for the poor, including those young ones who play God with their talents.”

“Absolutely. There are people these days who play God with their laptops, their pens and I-pads. Imagine some people jubilating over other people’s misfortune.”

“Six feet, my brother, not an inch more nor less. In the grave, all men are equal.”

Olusegun Adeniyi: The ‘Prophet’ And The Grave Diggers