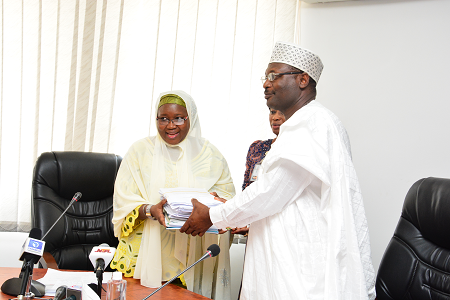 President Muhammadu Buhari, yesterday, called for punitive measures against perpetrators of electoral malpractices, saying it was not enough to cancel polls and order fresh ones.

He also called for the overhauling of the justice administrative system, stressing that unless electoral offenders were sanctioned, the system would not be made right.

Buhari made the call while inaugurating the new helmsmen of the Independent National Electoral Commission, INEC, at the Council Chambers of the Presidential Villa, Abuja.

President Buhari, “another area of concern is the justice administration of the electoral tribunals. It is long overdue that our justice system addresses these shortcomings. It is not just enough for an election to be cancelled and a new one ordered.

“It would be much better if all whose actions or inactions led to the cancellation of such election to be investigated and if culpable prosecuted whether they are individuals as candidates or party agents, institutions such as political party, electoral body, or public officers as electoral staff or security agents.

“Similarly, perpetrators of electoral violence and thuggery should not be spared. Unless our system stops covering up all forms of electoral malpractices we can hardly get it right. No system endures with impunity.”