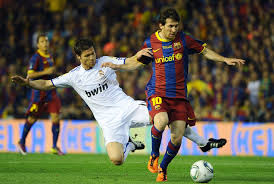 Real Madrid’s Cristiano Ronaldo is tired of comparisons with Barcelona rival Lionel Messi and understands why some people must dislike his personality or the ways he sees football. Speaking ahead of the release of his personal film “Ronaldo”, the FIFA World Player of the Year told Reuters TV that he is “not a fake person.”

“I have my style, he has his style, his own style,” he said of Messi, his greatest rival. “We have to respect that people compare all the time. And it is normal, we are compared since we are babies, I don´t mean me and Messi but all the persons in school. Who is more clever, who is more fast, it´s normal, it´s part of the life.

“It does not surprise me any more but some times it makes me tired because it´s always same thing and they still repeat and repeat, one year, another year, every year.”

Ronaldo to why people may dislike him, he said:

“Maybe the way I am, my personality, the way I see football. I´m not a fake person. It´s normal, it´s part of the business. No one can control that”.