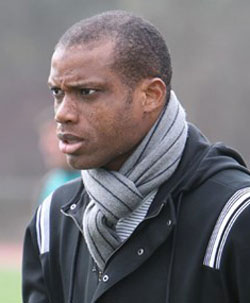 Super Eagles’ head coach, Sunday Oliseh, has been airlifted to Belgium after falling ill on Thursday, October 22, in the team’s camp in Port Harcourt.

According to the Nigeria Football Federation (NFF) officials, who made the announcement on Twitter, Oliseh became suddenly weak and dizzy after lunch.

“Coach Oliseh has returned to Belgium to continue treatment after being advised by Eagles medics. He became dizzy and weak after lunch on Thursday and he travels abroad tonight through the Port Harcourt Airport,” NFF officials wrote .

However, Punch investigations revealed that, based on doctors’ recommendation, the NFF flew Oliseh to Belgium immediately for proper consultations with his personal doctor.

The ex-international is believed to have relapsed as he had been reported ill shortly after Nigeria defeated Cameroon 3-0 in a friendly match played in Brussels.

It was gathered that he was not expected to be present at the match in Port Harcourt, but surprisingly he arrived in the camp 24 hours to the game.

The nature of his illness has not been ascertained.

Oliseh would miss the Super Eagles clash with Burkina Faso on Sunday in the second match of the qualifier for the 2016 Championship for African Nations.

West Ham 2-1 Chelsea, Photo Features Jose Mourinho On The Back Row At The Directors Box