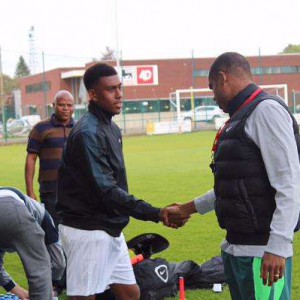 Oliseh, who was in charge during Super Eagles double-header friendlies against Congo DR and Cameroon in Belgium is taking time out to take care of his ailing body ahead of other major matches in the coming month.

According to statement released on the Nigeria Football Federation (NFF) on Wednesday evening, the former Super Eagles captain will not be available on Saturday, but may likely return to the team’s camp in Port Harcourt on Sunday.

“Owing to ill health,coach @SundayOOliseh won’t be available for Saturday’s CHAN qualifier vs Burkina Faso.He joins the team on Sunday”, the tweet reads on Wednesday.

Nigeria Beats Cameroon 3-0 In An International Friendly In Brussels