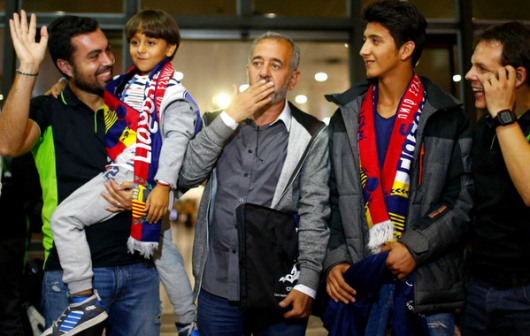 He was badly kicked and tripped by a Hungarian journalist when he and others fleeing tried to run away from security officials and has been offered a coaching job at a school for football coaches in Spain.

The event led to world condemnation which forced the media organisation to sack the said lady. According to the reports, the offer also comes with a house and temporal transport. After finding out that he was a coach at Syria’s biggest clubs before the war, members of Spain’s Cenafe national football coaching center decided to help him start a new life.

Cenafe dispatched a Moroccan trainee to help Abdul Mohsen and his sons get to Spain. They had been staying at a hotel in Munich, Germany. The 52-year-old revealed that his wife Muntaha, 38, eldest son Almuhannad, 18, and their 13-year-old daughter Doua’a, had stayed in Mersin, Turkey, where the family fled from Syria in 2012.

Cenafe president Miguel Angel Galan said that the fact that the 52-year-old was a football coach led to “solidarity because we are colleagues.”

Lil Wayne And Christina Milian Have Broken Up