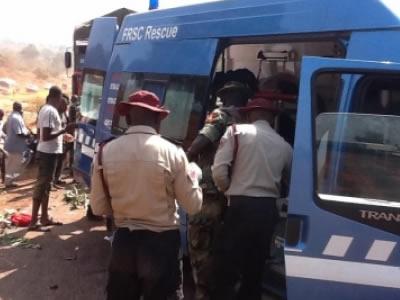 The immediate past Governor of Akwa Ibom State and Senate Minority Leader, Senator Godswill Akpabio, monday escaped death when he was involved in a ghastly car crash on his way to Nnamdi Azikiwe Airport, Abuja to join an international flight.

The United States Embassy has confirmed that the convoy of former Governor of Akwa Ibom State, Godswill Akpabio, collided with a suburban jeep belonging to the mission on Monday.

The Senior Information Specialist in the embassy, Sani Mohammed, said local authorities had commenced investigation into the accident.

He was however discharged at about 6 pm yesterday after he was treated for shock in a private ward of the hospital.
It was gathered that the former governor was not wearing a seat belt at the time of the accident.

A Federal Road Safety Commission (FRSC) official, who did not want to be named, told journalists that whereas occupants of the ambassador’s vehicles and Akpabio’s driver did not sustain any injury, the senator suffered a degree of injuries in the chest region.

The FRSC personnel, who was at the scene of the accident which occurred at about 7:25am near Bolingo Hotel, along the Abuja Airport Road in the Central Business District, said Akpabio was immediately rushed to the National Hospital for intensive care.
One of the senator’s aides, who was at the National Hospital, said Akpabio was on his way out of the country to visit his wife and children when the crash occurred.

However, the Chief Information Officer of the National Hospital, Rabiah Labaran, told journalists in her office that Akpabio was brought to the hospital by some FRSC officers who rescued him from the scene of the accident.

Labaran said: “He (Akpabio) was brought in this morning after he had a car crash as I learnt. He was brought in from the Bolingo Hotel junction where a vehicle crashed into his own vehicle from behind.

“Lucky enough, when they brought him after the preliminary check–up, it was found out that he did not have any serious injury. He was talking when he was brought in and they gave him the necessary attention at the trauma unit.

“I learnt that as at this afternoon (12:30pm), he was taken to the private wing of the hospital for proper care but there was no serious injury, though it has not been disclosed what kind of injury.

“It is something he can come over in a few days. He is currently recuperating. He was with his driver but the driver did not sustain injury.”
He was discharged last night and sources close to him confirmed that he would yet travel abroad to see his family and go for more medical check up.