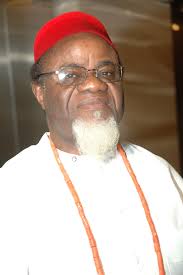 The presidency fired back at the Igbo leaders under the aegis of Igbo Leaders of Thought who had earlier faulted the Buhari administration.

The Igbo Leaders of Thought criticized the administration’s prosecution of the war against corruption, which it described as selective.

According to the group, the government was being teleguided by former leaders of Nigeria Generals Ibrahim Gbadamosi Babangida and Abdulsalami Abubakar, Olusegun Obasanjo.

The Igbo leaders classified the former heads of state as belonging to what they called “the invisible government of Nigeria”.

The presidency reacted to the criticism through a statement issued by Mallam Shehu Garba, senior special assistant on media and publicity, on August 15, Saturday.

“He will listen to everyone as a leader who is open to all. Nobody should lose sight of the fact that responsibility is his own and he is conscious of that. So, saying that somebody is teleguiding him cannot be the case,” he stated.

Speaking on the government’s intention to probe corrupt practices, Garba stressed that though the administration was not probing anybody at the moment, his principal cannot stop the Economic and Financial Crimes Commission (EFCC) and the Independent Corrupt Practices and Other Related Offences Commission (ICPC) from doing their work.

The presidential spokesperson stressed that Buhari swore to protect the Constitution of Nigeria; therefore, he cannot turn a deaf ear to the looting of public treasury and crude oil theft.

“People who don’t know him can make those assumptions but those who know him cannot make the mistake of saying this. From his days as a candidate, he said government will not dissipate time and energy on probes. As I speak to you now, President Buhari’s government has not engaged in probes.

“Government is not probing anybody at the moment. But there are matters that he has turned on the table, going through the processes of investigations by the EFCC, ICPC; whatever, those things are, they must go on. Whatever is on the table must be treated.

Buhari Wants Fearless & Courageous Judges To Prosecute Those Who Have Stolen

Two Months Gone, No Bill Passed But Naira Rain At NASS As Senators Collect N23.4m Each